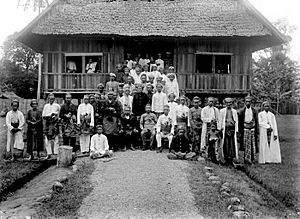 Sultan of Bima, Raja Naib, sitting in the middle of a group.

From 1620 to 1958 it was the capital of the Bima Sultanate, one of the four sultanates on Sumbawa. Today, Bima is the largest regional and economic center of Eastern Sumbawa. People from other parts of Indonesia, especially Java, Bali, and Lombok came to live in the city.

The city is on the eastern shore of Bima Bay. Bima is on the Sumbawa road. Sape harbor is to the east and Dompu to the southwest. Historically, Bima was a port city that connected to other port cities in Eastern Indonesia such as Makassar and Ternate, and to ports in Lombok, Bali, and East Java. Bus services from Bima go to neighboring cities in Sumbawa and as far as Mataram in Lombok. 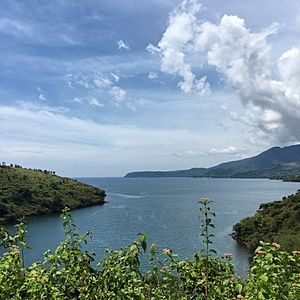 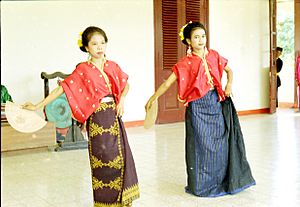 Dance in the Sultan's Palace

Bima has several popular tourist destinations, such as Mount Tambora, Wawo traditional Village, Snake Island, Ana Fari Lake, and Satonda Island. There are many white sandy beaches in north and sout Bima. The main attractions are the Sultan Salahuddin Mosque and Sultan Salahuddin Museum. The museum used to be the Bima Sultanate palace. Bima airport serves domestic and international visitors

All content from Kiddle encyclopedia articles (including the article images and facts) can be freely used under Attribution-ShareAlike license, unless stated otherwise. Cite this article:
Bima Facts for Kids. Kiddle Encyclopedia.