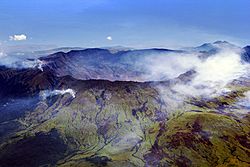 Aerial view of the caldera of Mount Tambora

Mount Tambora (8°14’41”S, 117°59’35”E) is an active volcano in Indonesia. It is on top of a subduction zone. Tambora was taller before its explosive volcanic eruption in 1815. This killed tens of thousands of people around the world. Later eruptions have been smaller.

When the volcano erupted in 1815, it climaxed on 10 April. It was the most destructive volcanic eruption in modern history. It has been estimated that it was four times larger than the 1883 eruption of Krakatoa, between Java and Sumatra, in terms of volume of magma ejected. Before the explosion, Tambora was 4,300 m (14,100 ft) high, now it is only 2,722 m (8,930 ft) high. Its massive crater is therefore a caldera.

The eruption destroyed a small Asian culture, known to archaeologists as the Tamboran kingdom. Most deaths from the eruption were from starvation and disease, as the fallout ruined farming in the local region. The death toll was at least 71,000 people, of whom 11,000–12,000 were killed directly by the eruption. The often-cited figure of 92,000 people killed is believed to be overestimated.

It launched 160 cubic kilometers – 160 km3 (38 cu mi) – of ash into the upper atmosphere. This caused famine around the world. Tambora's 1815 outburst was the largest volcanic eruption in recorded history. The explosion was heard on Sumatra island more than 2,000 km (1,200 mi) away. Heavy volcanic ash falls were observed as far away as Borneo, Sulawesi, Java and Maluku islands.

The eruption caused a global climate change known as the "volcanic winter". 1816 became known as the "Year without a summer" because of the effect on North American and European weather. Crops failed and livestock died in much of the Northern Hemisphere, resulting in the worst famine of the 19th century.

All content from Kiddle encyclopedia articles (including the article images and facts) can be freely used under Attribution-ShareAlike license, unless stated otherwise. Cite this article:
Mount Tambora Facts for Kids. Kiddle Encyclopedia.