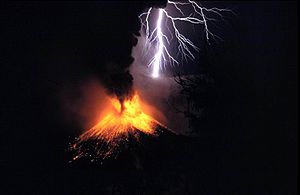 Mount Rinjani or Gunung Rinjani is an active volcano on Lombok, Indonesia. It is 3,726 metres (12,224 ft) high, making it the second highest volcano in Indonesia.

On the top of the volcano is a 6-by-8.5-kilometre (3.7 by 5.3 mi) caldera, which is filled partially by the crater lake known as Segara Anak or Anak Laut (Child of the Sea), due to the color of its water, as blue as the sea (laut). This lake is approximately 2,000 metres (6,600 ft) above sea level and estimated to be about 200 metres (660 ft) deep; the caldera also contains hot springs. Sasak tribe and Hindu people assume the lake and the mount are sacred and some religious activities are occasionally done in the two areas. On 27 September 2016 14:45 WITA Rinjani erupted. UNESCO has made Mount Rinjani Caldera a part of the Global Geoparks Network in April 2018.

Map of volcanoes in Indonesia

The Rinjani caldera-forming eruption is thought to have occurred in the 13th century. Dated to "late spring or summer of 1257," this 1257 Samalas eruption is now considered the likely source of high concentrations of sulfur found in widely dispersed ice core samples and may have been "the most powerful volcanic blast since humans learned to write." The massive eruption may have triggered an episode of global cooling and failed harvests. Before this eruption, the Segara Anak caldera was a volcanic mountain named Samalas, which was higher than Rinjani.

Eruption rate, eruption sites, eruption type and magma composition have changed during the last 10,000 years before the caldera forming eruption. The eruptions of 1994 and 1995 have presented at Gunung Baru (or 'New Mountain' – approximately 2,300 metres (7,500 ft) above sea level) in the center of this caldera and lava flows from subsequent eruptions have entered the lake. This cone has since been renamed Gunung Barujari (or 'Gunung Baru Jari' in Indonesian).

The first historical eruption occurred in September 1847. The most recent eruption of Mount Rinjani was in May 2010 and the most recent significant eruptions occurred during a spate of activity from 1994 to 1995 which resulted in the further development of Gunung Barujari. Historical eruptions at Rinjani dating back to 1847 have been restricted to Barujari cone and the Rombongan dome (in 1944) and consist of moderate explosive activity and occasional lava flows that have entered Segara Anak lake. The eruptive history of Rinjani prior to 1847 is not available as the island of Lombok is in a location that remained very remote to the record keeping of the era.

On 3 November 1994, a cold lahar (volcanic mudflow) from the summit area of Rinjani volcano traveled down the Kokok Jenggak River killing thirty people from the village of Aikmel who were caught by surprise when collecting water from the river in the path of the flow.

In connection with the eruption of the cone Gunung Barujari the status for Gunung Rinjani was raised from Normal (VEI Level 1) to 'be vigilant' (VEI Level 2) since 2 May 2009. In May 2010 Gunung Rinjani was placed in the standby status by Center for Volcanology & Geological Hazard Mitigation, Indonesia with a recommendation that there be no activity within a radius of 4 kilometres (2.5 mi) from the eruption at Gunung Barujari.

All content from Kiddle encyclopedia articles (including the article images and facts) can be freely used under Attribution-ShareAlike license, unless stated otherwise. Cite this article:
Mount Rinjani Facts for Kids. Kiddle Encyclopedia.