The jackfruit (Artocarpus heterophyllus), also known as jack tree, fenne, jakfruit, or sometimes simply jack or jak, is a species of tree in the fig, mulberry, and breadfruit family (Moraceae) native to southwest India.

The jackfruit tree is well suited to tropical lowlands, and its fruit is the largest tree-borne fruit, reaching as much as 35 kg (80 lb) in weight, 90 cm (35 in) in length, and 50 cm (20 in) in diameter. A mature jackfruit tree can produce about 100 to 200 fruits in a year. The jackfruit is a multiple fruit, composed of hundreds to thousands of individual flowers, and it is the fleshy petals that are eaten.

The jackfruit tree is a widely cultivated and popular food item throughout the tropical regions of the world. Jackfruit is the national fruit of Bangladesh. 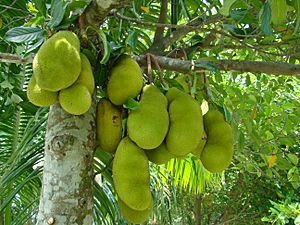 The jackfruit has played a significant role in Indian agriculture for centuries. Archeological findings in India have revealed that jackfruit was cultivated in India 3000 to 6000 years ago. It has also been widely cultivated in southeast Asia. Stingless bees such as Tetragonula iridipennis are jackfruit pollinators, and as such, play an important role in jackfruit cultivation.

The jackfruit also provides a potential solution to countries facing problems with food security, such as several countries of Africa. In terms of taking care of the plant, minimal pruning is required; cutting off dead branches from the interior of the tree is only sometimes needed. 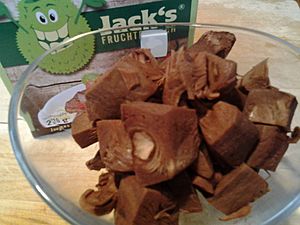 Jackfruit has the look and texture of meat

Jackfruit have a distinctive sweet and fruity aroma. The inside of the fruit has been described as smelling of pineapple and banana. After roasting, the seeds may be used as a commercial alternative to chocolate aroma. The flesh of the fruit is starchy and fibrous and is a source of dietary fiber.

The flavor is comparable to a combination of apple, pineapple, mango, and banana. Jackfruit is commonly used in South and Southeast Asian cuisines. The ripe and unripe fruit is used, as are the seeds. 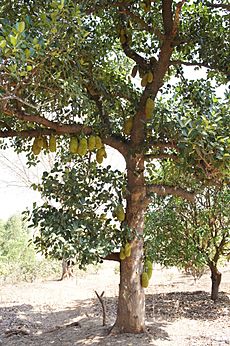 The wood of the tree is used for the production of musical instruments. In Indonesia, hardwood from the trunk is carved out to form the barrels of drums used in the gamelan, and in the Philippines, its soft wood is made into the body of the kutiyapi, a type of boat lute. It is also used to make the body of the Indian string instrument veena.

The golden yellow timber with good grain is used for building furniture and house construction in India. The ornate wooden plank called avani palaka, made of the wood of the jackfruit tree, is used as the priest's seat during Hindu ceremonies in Kerala. In Vietnam, jackfruit wood is prized for the making of Buddhist statues in temples and fish sauce barrels.

Jackfruit wood is widely used in the manufacture of furniture, doors, and windows, and in roof construction. The heartwood is used by Buddhist forest monastics in Southeast Asia as a dye, giving the robes of the monks in those traditions their distinctive light-brown color.

Jackfruit industries are established in Sri Lanka and Vietnam, where the fruit is processed into products such as flour, noodles, papad, and ice cream. It is also canned and sold as a vegetable for export. The wood of the jackfruit tree is important in Sri Lanka and is exported to Europe; it is termite-proof and is superior to teak for building furniture.

All content from Kiddle encyclopedia articles (including the article images and facts) can be freely used under Attribution-ShareAlike license, unless stated otherwise. Cite this article:
Jackfruit Facts for Kids. Kiddle Encyclopedia.