Kuta, formally Kuta Village or Kuta Town is a tourist area, administratively a sub district/village, and at the same time is the Capital of Kuta District, Badung Regency, southern Bali, Indonesia.

A former fishing village, it was one of the first towns on Bali to see substantial tourist development, and as a beach resort remains one of Indonesia's major tourist destinations.

It is known internationally for its long sandy beach, varied accommodation, many restaurants and bars, and many renowned surfers who visit from Australia. It is located near Bali's Ngurah Rai Airport. 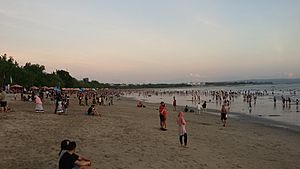 The beach has been notable since the early 1970s. Kuta beach is also known as Sunset Beach, as opposed to the Sunrise Beach, another name for Sanur Beach. Luxury resorts, restaurants, and clubs are located along the beach.

In 2011, a two-meter white sandstone fence, built in a Balinese architecture style, was built along the road to block the sand from blowing to the cafes and restaurants. Some tourists dislike it as it is considered to be blocking the beach view, while others believe the wall helps dampen the sounds from the congested traffic on the adjacent street.

To make the beach cleaner, as of late August 2011, the vendors are prohibited from selling food on the beach, but they are still allowed to sell beverages and souvenirs.

Kuta is well known in Bali for being a cheap tourist destination for Australians due to its close proximity. 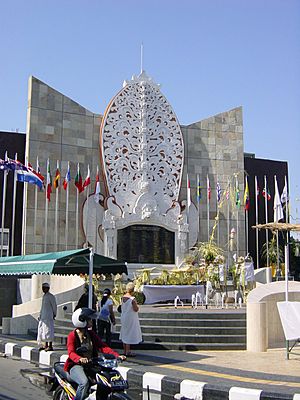 After the first Bali Bombing in 2002 at Kuta, which killed 202 people including 88 Australians, a permanent memorial was built on the site of the destroyed Paddy's Pub on Legian Street. (A new bar, named "Paddy's: Reloaded", was reopened further along Legian Street.)

The memorial is made of intricately carved stone, set with a large marble plaque, which bears the names and nationalities of each of those killed. It is flanked by the national flags of the victims. The monument is well-maintained and illuminated at night.

The memorial was dedicated on 12 October 2004, the second anniversary of the attack. The dedication included a Balinese Hindu ceremony and the opportunity for mourners to lay flowers and other offerings. The Australian ambassador and Indonesian officials attended the ceremony as most of the victims were Australians.

All content from Kiddle encyclopedia articles (including the article images and facts) can be freely used under Attribution-ShareAlike license, unless stated otherwise. Cite this article:
Kuta Facts for Kids. Kiddle Encyclopedia.