Arab Indonesians are citizens of Indonesia. Their origin is Arab, and they are mainly from Hadrami. Until 1919, they were part of Dutch East Indies' law. Some people later gained economic power through real estate investment and trading. Currently, most of them can be found in Java and South Sumatra. They are almost all (generally orthodox) Muslims.

Indonesia has had contact with the Arab world for hundreds of years. This was even before the development of Islam in Indonesia. Most contact was with spice traders. The first Arab settlements in the archipelago may have started in the fifth century. These early communities took over much of the local culture. Some of them disappeared completely while others formed ethnic groups.

Modern Arab Indonesians are descended from Hadramis, who came to Indonesia during the Dutch colonial period. The men often married native women. They were classified as "foreign orientals" along with Chinese Indonesians. This class stopped them from going to certain schools and also restricted their travel. They were also only allowed to live in special Arab districts, called kampung Arab in Indonesian. These laws were removed in 1919.

The community elites began to build economic power through trade and real estate investment. They bought large amounts of real estate in Batavia (modern-day Jakarta), Singapore and other parts of this area. Arab Indonesians did charity work, and built and protected their social capital. Eventually, some Arab Indonesians joined the Volksraad, the people's council of the Dutch East Indies.

Azyumardi Azra described Arab Indonesians as people who wish to remove local religious elements from Indonesian Islam. Indonesian critics of Arab influence in Indonesia point to the founding of the radical group Jemaah Islamiah (JI). Their leader is Laskar Jihad (LJ). After the September 11 attacks on the World Trade Center in 2001 and the 2002 Bali bombing, the community came under suspicion.

First generation immigrants are called wulāytī or totok. They are a small minority of the Arab Indonesian population. The majority, muwallad (plural form: muwalladīn), were born in Indonesia and may be of mixed heritage.

The majority of Arab Indonesians live on Java, mostly in East Java. Some live in South Sumatra. 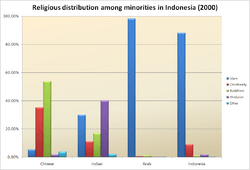 Arab Indonesians (second from right) had a higher proportion of Muslims than other ethnic groups.

Arab Indonesians are almost all Muslim. According to the 2000 census, 98.27 percent of Arab Indonesians are Muslim, compared to 88.22 percent of the whole population. Historically, most have lived in kauman, or the area around mosques, but this has changed in recent years. The majority are Sunni, people who follow the Shafi'i school of Islamic law. The Shia are a growing minority. Children are often sent to madrasahs.

All content from Kiddle encyclopedia articles (including the article images and facts) can be freely used under Attribution-ShareAlike license, unless stated otherwise. Cite this article:
Arab Indonesians Facts for Kids. Kiddle Encyclopedia.