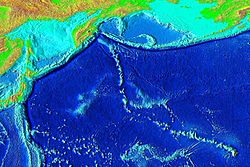 The Shatsky Rise is an oceanic plateau southeast of Japan. It lies on the floor of the Pacific Ocean.

It includes what may be the largest volcano yet discovered on Earth, the Tamu Massif. The Rise and its volcanics may have formed during the Upper Jurassic to Lower Cretaceous epochs. It is at the triple junction of three tectonic plates. These are the Pacific, the Farallon, and the Izanagi.

It was named after Nikolay Shatsky (1895-1960), a Soviet geologist. He was an expert in tectonics of ancient platforms.

All content from Kiddle encyclopedia articles (including the article images and facts) can be freely used under Attribution-ShareAlike license, unless stated otherwise. Cite this article:
Shatsky Rise Facts for Kids. Kiddle Encyclopedia.