Izalco is a stratovolcano on the side of the Santa Ana Volcano, which is located in western El Salvador. It is situated on the southern flank of the Santa Ana volcano. Izalco erupted almost continuously from 1770 (when it formed) to 1958 earning it the nickname of "Lighthouse of the Pacific", and experienced a flank eruption in 1966.

During an eruption in 1926, the village of Matazano was buried and 56 people were killed. The formation of the volcano actually occupied highly arable land on the southern slope of the Santa Ana volcano which was used for the production of coffee, cacao and sugar cane 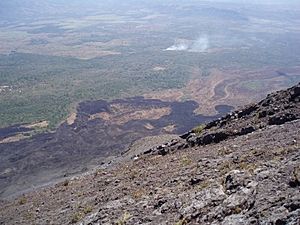 Lava flow of the 1966 flank eruption over the much older lava flow. This image looks towards the south from the slope of Izalco

Today, Izalco experiences only fumarolic activity in the form of rainwater seeping into the volcano and contacting hot rocks, rather than steam emissions from underground gases. The fumarole deposits of the volcano are noted as sources for several rare minerals. 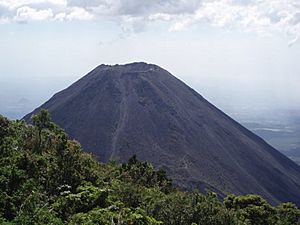 The volcano is visited and climbed regularly by tourists to El Salvador via the Cerro Verde National Park and is a national icon of the country, even featured on the 10 colón bank note (US dollars replaced the colon in 2001, so the bank note is no longer in circulation). The volcano is currently quiescent but may erupt again.

A hotel was built on the nearby Cerro Verde to provide accommodation with a view of the erupting volcano, but the volcano ceased to erupt shortly before the hotel was completed. 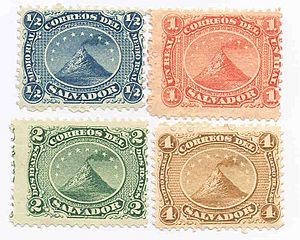 The volcano on the stamps' central oval design is an allegorical representation of the coat of arms existing at the time; the stamps depict the Izalco volcano, popularly known as "El Faro del Pacífico" - "The Lighthouse of the Pacific". Covers genuinely used with these stamps are rare. So far, only 37 have been recorded.

Izalco and The Little Prince

In the French novella The Little Prince by Antoine de Saint-Exupéry, the Prince's and Rose's planet Asteroid B-612 most prominent features are three minuscule volcanoes (two active, and one dormant or extinct). Izalco and Santa Ana Volcano are the two active, and Cerro Verde is the dormant volcano. The book was inspired by Antoine's life with his Salvadoran wife Consuelo de Saint Exupéry.

All content from Kiddle encyclopedia articles (including the article images and facts) can be freely used under Attribution-ShareAlike license, unless stated otherwise. Cite this article:
Izalco (volcano) Facts for Kids. Kiddle Encyclopedia.