There were 47 people on or near the island at the time. There were twenty one people killed, including two still missing believed to be dead. While twenty-six were injured, many critically.

Prime Minister Jacinda Ardern said that "the scale of this tragedy is devastating". New Zealand Police launched an investigation into the disaster, in conjunction with WorkSafe New Zealand.

Experts identified the event as a phreatic eruption: a release of steam and volcanic gases that caused an explosion, launching rock and ash into the air. 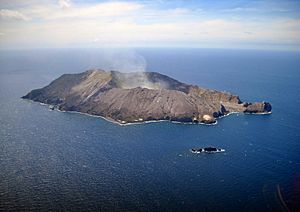 The volcano had been showing signs of unrest for several weeks before the 2019 eruption.

On 24 November, two weeks prior to the eruption, a 5.9 earthquake lasting approximately one minute with an epicentre located 10 kilometres (6.2 mi) northeast of White Island occurred, and was felt by people throughout New Zealand as far south as Christchurch. 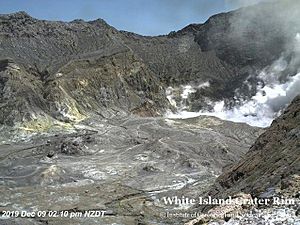 The crater rim, captured by webcam one minute before eruption. Hikers can be seen walking in the centre of the image.

Some visitors were waiting for vessels to take them off the island at the time of the eruption.

Tour operators and these vessels rescued 23 people from the island before it was officially declared unsafe.

Noticing the eruption from the mainland shore, three commercial helicopter pilots conducted rescue missions to the island in their helicopters, bringing back twelve survivors (five, five, and two, respectively). They observed several bodies in the area, but concentrated on bringing back the survivors.

The forty-seven people on the island at the moment of the eruption were identified as twenty-four Australians, nine Americans, five New Zealanders, four Germans, two Chinese, two Britons and one Malaysian. A passenger on a rescue boat stated that many of the injured had severe burns as many of them had worn just T-shirts and shorts for the day.

All content from Kiddle encyclopedia articles (including the article images and facts) can be freely used under Attribution-ShareAlike license, unless stated otherwise. Cite this article:
2019 Whakaari/White Island eruption Facts for Kids. Kiddle Encyclopedia.