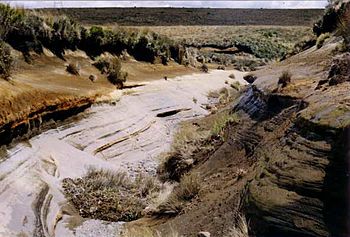 A volcanic plateau is a plateau produced by volcanic activity. There are two main types: lava plateaux and pyroclastic plateaux. 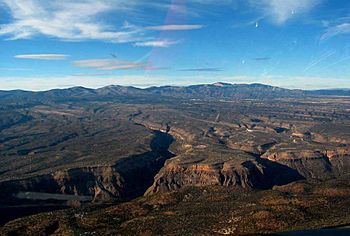 The Pajarito Plateau in New Mexico, United States is an example of a volcanic plateau

Lava plateaux are formed by highly fluid basaltic lava during numerous successive eruptions through numerous vents without violent explosions (quiet eruptions). These eruptions are quiet because of low viscosity of lava, so that it is very fluid and contains a small amount of trapped gases. The resulting sheet lava flows may be extruded from linear fissures or rifts or gigantic volcanic eruptions through multiple vents characteristic of the prehistoric era which produced giant flood basalts. Multiple successive and extensive lava flows cover the original landscape to eventually form a plateau, which may contain lava fields, cinder cones, shield volcanoes and other volcanic landforms. In some cases, a lava plateau may be part of a single volcano. An example is the massive Level Mountain shield volcano in northern British Columbia, Canada, which covers an area of 1,800 km2 (690 sq mi) and a volume of 860 km3 (210 cu mi).

Perhaps the most extensive of all the subaerial basaltic plateaux existed during the Paleogene and possibly extended over 1,800,000 km2 (690,000 sq mi) of the northern Atlantic Ocean region. This region, known as the Thulean Plateau, is generally believed to have been broken up by foundering of the Earth's crust to form the present ocean basin.

The Earth features numerous subaerial and submarine volcanic plateaux such as the Columbia River Plateau (subaerial) and the vast Ontong Java Plateau (submarine).

Examples include Shirasu-Daichi which covers almost all of southern Kyūshū, Japan and the North Island Volcanic Plateau in New Zealand.

All content from Kiddle encyclopedia articles (including the article images and facts) can be freely used under Attribution-ShareAlike license, unless stated otherwise. Cite this article:
Volcanic plateau Facts for Kids. Kiddle Encyclopedia.