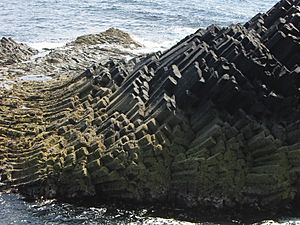 Basalt columns: Am Buchaille on Staffa 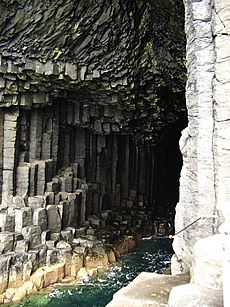 Staffa is an island in the Inner Hebrides off the north-west of Scotland. It is famous for Fingal's Cave and other examples of basalt columns. No-one lives there.

The islands became part of the Kingdom of Mann and the Isles, the Suðreyjar kingdom of the Norse. The Norsemen ruled for over 400 years until sovereignty was transferred to Scotland by the Treaty of Perth in 1266. The islands were then held by the Clans MacLeod and MacDonald, but Staffa was not regularly inhabited.

This small island is entirely of volcanic origin. It consists of a basement of tuff, underneath colonnades of a black fine-grained Tertiary basalt, overlying which is a third layer of basalt lava. Slow cooling of the second layer of basalt resulted in an extraordinary pattern of hexagonal columns which form the faces and walls of the principal caves. The lava contracted as it cooled and solidified into columns, a process known as columnar jointing.

The columns have three to eight sides, six being most common. The columns are also divided horizontally by cross joints. Similar formations are found at the Giant's Causeway in Northern Ireland, on the island of Ulva and Ardmeanach on the Isle of Mull. The 'Staffa Group' is the name given to the series of olivine basalts found in and around Mull. The volcanic eruptions took place 55–58 million years ago.

All content from Kiddle encyclopedia articles (including the article images and facts) can be freely used under Attribution-ShareAlike license, unless stated otherwise. Cite this article:
Staffa Facts for Kids. Kiddle Encyclopedia.