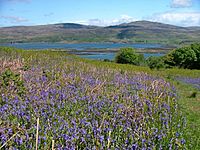 There are many wild flowers on the Isle of Ulva

Ulva or the Isle of Ulva (Gaelic: Ulbha) is an island in the Inner Hebrides in Scotland. Around 16 people live there. At the beginning of the 19th century, 600 people lived there. Lachlan Macquarie who is sometimes known as the "Father of Australia", came from here.

All content from Kiddle encyclopedia articles (including the article images and facts) can be freely used under Attribution-ShareAlike license, unless stated otherwise. Cite this article:
Ulva Facts for Kids. Kiddle Encyclopedia.