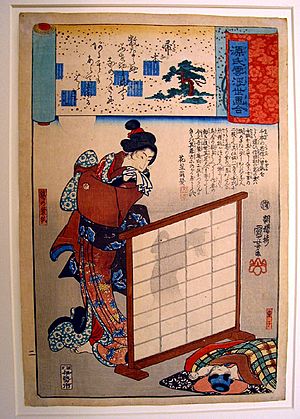 Kuzunoha the fox-woman. Kuzunoha was a popular figure in Japanese folklore

Japanese folklore is the folklore of Japan. It is very influenced by Shinto and Buddhism, the two most important religions in the country. It usually includes humorous or strange characters and situations. It also includes many supernatural creatures, such as kami (gods and revered spirits), yōkai (monster-spirits) (like oni, kappa, and tengu), onryō (ghosts), dragons, and animals with supernatural powers like the kitsune (fox), tanuki (raccoon dog), mujina (badger), and bakeneko (transforming cat).

Some famous Japanese folktales and legends include: 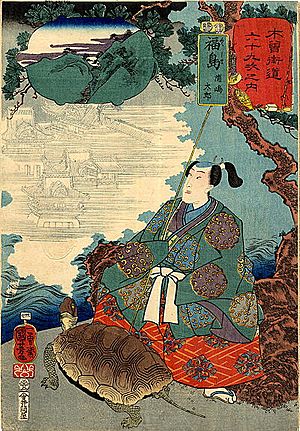 All content from Kiddle encyclopedia articles (including the article images and facts) can be freely used under Attribution-ShareAlike license, unless stated otherwise. Cite this article:
Japanese folklore Facts for Kids. Kiddle Encyclopedia.