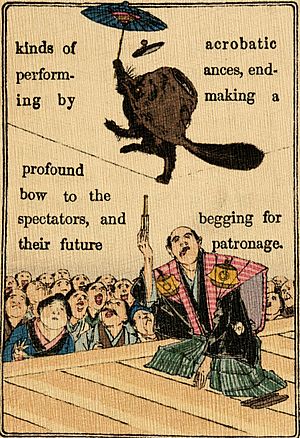 Bunbuku Chagama (分福茶釜 or 文福茶釜code: ja is deprecated ) , literally "Bunbuku tea-kettle" is a Japanese folktale or fairy tale about a raccoon dog, or tanuki, that uses its shapeshifting powers to reward its rescuer for his kindness.

The fairy tale version has been translated as "The Accomplished and Lucky Teakettle" (1871) by Mitford and as "The Wonderful Tea Kettle" (1886) in the crepe-paper book series published by T. Hasegawa. The raccoon dog is ill-treated as a tea-kettle at a temple and sold off; it later performs a dance and tightrope walking routine, and the subsequent owner turned showman acquires great wealth.

In most folk tale versions, the raccoon dog or fox transforms into a kettle so that its human friend or benefactor can make profit by selling the fake kettle, typically to a priest.

In legend, Bunbuku chagama is the name of a tea kettle owned by priest Shukaku who turned out to be an ancient raccoon dog or mujina, the supposed kettle still on view at Morin-ji [ja] temple which Shukaku served. 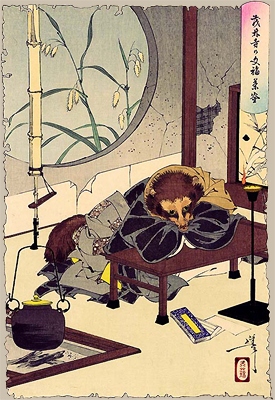 The fairy tale originated from the legend of the raccoon dog priest (Shukaku) of Morin-ji, who owned a magic "luck-sharing" tea kettle Bunbuku chagama.
―Tsukioka Yoshitoshi, 1889-1892.

One suggested hypothesis is that bunbuku is an onomatopeic word mimicking the sound of boiling water, while the character buku (fuku) in the name denotes "good luck" or "good fortune".

A second explanation is that bunbuku when written as 分福 means "sharing (bun) the wealth/fortune/luck (fuku)". This is according to the origin tale (engi) surrounding Morin-ji, and the essay Kasshi yawa.

Yet another theory claims that the correct name is Bunbuka (文武火code: ja is deprecated ), with bunka signifying a mild flame and buka signifying an intense flame. This explanation is given, for example, by Toriyama Sekien.

The following summary is based on three early English translations of the fairy tale version.

At a temple called Morin-ji [ja] in Kōzuke Province (now Gunma Prefecture), the master priest (abbot) owns a chagama (tea kettle). When the priest sets the kettle on a hearth, the kettle sprouts a head and a tail (or legs as well), and turns into a half-badger, half tea-kettle creature. What is loosely translated as a "badger" here is strictly speaking a tanuki or raccoon dog.

The priest and his novices subdue it, and since it reverts to the form of an ordinary kettle, they sell it to a traveling tinker or rag-peddler. The kettle reveals its half-tanuki form to the peddler, and the merchant acts on a friend's advice to command the beast to turn tricks, or, is persuaded by the tanuki itself, which bargains to perform acrobatics in exchange for being well-treated. The peddler agrees to neither put it over hot flame nor stow it away in a stuffy box, and share what food he has.

The man sets up a circus-like roadside attraction and charges admission for people to see the tea-kettle badger walking a tightrope to the tune of music. The man becomes wealthy, and returns the kettle to Morin-ji temple.

Algernon Bertram Mitford published a version of it entitled "The Accomplished and Lucky Teakettle" in Tales of Old Japan (1871), illustrated by woodcuts from drawings by the artist "Ôdaké".

A similar (slightly more elaborate) plot is found in "The Wonderful Tea Kettle" (June 1886), the retelling by Mrs. T. H. James (Kate James), published by Hasegawa Takejirō as Japanese Fairy Tale Series No. 16 (these books are classed in the chirimen-bon or "crepe-paper books" genre). The artist, who was not credited in print, has been identified as error: {{nihongo}}: Japanese or romaji text required (help) from the signature on the cover art.

Also of similar plot is the Japanese version retold by Iwaya Sazanami [ja], also published in English as "The Tea-Kettle of Good-Luck" in the anthology Iwaya's Fairy Tales of Old Japan (1903) translated by Hannah Riddell. Iwaya's version that appeared in Nihon Otogibanashi is said to have established enduring recognition of the tale in Japan.

The tale has also been referred to as "The Lucky Tea-Kettle" by Basil Hall Chamberlain, under a handbook entry for "Fairy tales".

The tale group "Bunbuku chagama (Bunbuku Tea-kettle)" has been categorized as Types of Japanese Folktales No. 130 by Keigo Seki. Seki here treats the tale group as one involving the fox, and summarizes as follows:

The fox is captured or tricked by a man and transforms into a tea kettle; the man then sells the kettle, typically to a high priest (oshō). When the kettle is scrubbed, it yells "ouch", and when placed on fire, it yells "hot" and starts dancing. Subsequently it flees, or returns to the seller, and/or performs dances in tea-kettle form to profit the owner.

The dancing raccoon dog, which is a familiar motif in the fairy tale, is comparatively rare among folk tales.

Indeed, there are both fox or tanuki folktale examples.

One example involving a "badger" (raccoon dog (狸code: ja is deprecated , tanuki)) is the English-summarized folktale "Bunbuku Teakettle" collected from Shimoina District, Nagano. This tale is quite similar to the untranslated fox tale "Bage-chagama (化げ茶釜code: ja is deprecated )" ("Shapeshifting teakettle") from Shiwa District, Iwate: in either case, the beast-kettle is sold for 3 ryō and flees to the mountains in the end. 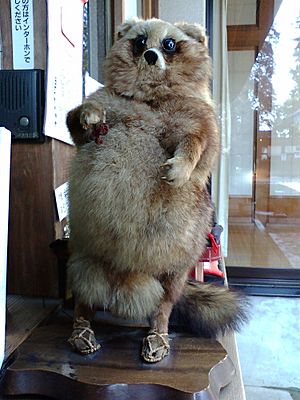 Taxidermy of a raccoon dog (tanuki), with waraji on its hind feet, displayed at Morin-ji.

The fairy tale version is thought to be connected to the legend about an inexhaustible tea kettle at the temple Morin-ji [ja] in Tatebayashi, Gunma, owned by a priest named Shukaku (守鶴code: ja is deprecated ) who turned out to be an ancient mujina (raccoon dog or badger).

The nineteenth century fairy tale (such as represented by Iwaya Sazanami's version) may also be descended from the seventeenth to eighteenth century Edo Period popular fiction of the akahon type.

The priest Shukaku (who later turned out to be a raccoon dog) had accompanied the priest who founded the Morinji-temple during the Ōei era (year 1426); then while serving the 7th abbot Shukaku brought out an inexhaustible tea-kettle or cauldron (chagama), able to supply hot water day and night without running out, and thus was able to serve tea to over one thousand priests (the occasion was a thousand-man Buddhist service [ja] held in 1570). Shukaku said the kettle was called Bunbuku chagama because it had eight virtues and shared (bun) its fortunes (fuku); it imparted immunity from thirst ailment, virtue in both scholarly and martial arts, intelligence, fearlessness, popular affection, luck and advancement, and longevity.

As to what became of Shukaku, during the tenure of the 10th abbot at the temple, rumors began to circulate that he would all of a sudden grow furry in his limbs and sprout a tail. Shukaku then confessed to being a mujina aged several thousand years. He had heard the preaching of the Buddha Sakyamuni at Holy Eagle Peak, moved to the Tang Empire and has lived in Japan these 800 or so years. Before he left he showed his friends conjured up visions of the Battle of Yashima and the Buddha preaching before a crowd of Buddhist saints (rakan).

The aged raccoon dog first living in India and China before coming to Japan resembles the circumstance of Tamamo-no-Mae, the legendary female nine-tailed fox, and the motif is thought to be modeled on that vixen legend.

In variant recensions, Shukaku was a nassho (納所code: ja is deprecated ) "sexton", and the revelation of his tea kettle occurred at the gathering in Tenshō 10 or 7 (1582 or 1579). Here, his past reached further into remote antiquity since he says he came to Japan with Jofuku 1800 years before, after living India for 500 years and in China for 1000 years.

=This legend is documented in origin-tales (engi) concerning Morinji and the tea-kettle, published in several editions by Morin-ji temple. The title Bunbuku chagama ryakuengi (分福茶釜略縁起code: ja is deprecated ) is borne by the earliest edition (nominally 1587, but probably dating to around the Genroku era or c. 1700) as well as later undated editions (possibly c. 1800).

The text of the later edition of Bunbuku chagama ryakuengi contains more detail (motifs), and is identical to the account found in the essay Kasshi yawa [ja] (1821–1841) by Kiyoshi Matsura.

One example is an edition of Bunbuku chagama printed by Urokogataya, dating to c. 1735–45. The storyline is as follows. A monk named Bunbuku serving Lord Higashiyama in Kyoto captures an old raccoon dog (mujina) by causing the creature to lower its guard by joining the monk in dance. Bunbuku and his comrades, the four tea monks, decide to butcher the creature and make it into soup (suimono [ja]). The creature flees but is cornered and turns itself into a tea kettle. The monks place the kettle on fire and are amused to see it turn halfway back into the furry creature, and it escapes. The lord hears of this incident, and declares this to be disgraceful, ordering the monks to be stripped of clothes and cast out. The old raccoon dog finds the monks and decides to cover them up like a blanket (fusuma [ja]). The monks were slightly discomfited, but when they woke up, captured the beast and presented it to their lord, and are restored to his good grace.

This Urokogata edition is considered a remake from Kondō Kiyoharu [ja]'s Bunbuku chagama, dating to the Kyōhō era (1716–1736). This text follows a similar story-line except it is a fox which is imperiled with being cooked by the Higashiyama priests and turns into a tea kettle, and the fox entrusts the revenge to the raccoon dog. This work too has its precedence, a similar tale dating back to around the Enpō or Tenna eras (1673–1684), and entitled Kyō Higashiyama bake gitsune (『京東山ばけ狐』code: ja is deprecated ).

All content from Kiddle encyclopedia articles (including the article images and facts) can be freely used under Attribution-ShareAlike license, unless stated otherwise. Cite this article:
Bunbuku Chagama Facts for Kids. Kiddle Encyclopedia.