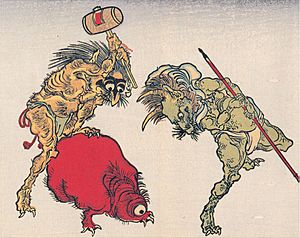 A ukiyo-e painting of yōkai by Kawanabe Kyosai.

Yōkai are creature in old Japanese stories, such as oni, kappa, or tengu. They have mysterious supernatural powers. There are thousands of yōkai. In the Edo period, yōkai were characters in story books. Recently, many new yōkai have been made. There is even a yōkai dictionary. The yōkai are monsters or ghosts in Japanese tradition. In the past people believed they caused disease, accidents, and natural disasters. People were often scared of them.

The most famous yōkai are Tengu, Oni (Japanese ogre), and Kyubi no Kitsune (a fox with nine tails). When some people and animals are filled with hate, they became yōkai. For example, Sutoku. Sutoku (Japanese ancient emperor) died filled with hate. Then, he became a Tengu and caused a disaster. Also, a cat which lived too long time became Nekomata.

Recently, yōkai are familiar with people as subculture in Japan.

In recent decades, the yōkai have been frequently depicted in Japanese fiction and media, particularly in horror or fantasy-themed works, such as in manga, anime and films, as well as in videogames, a notable example of this is the manga GeGeGe no Kitarō, written by mangaka Shigeru Mizuki, of which is entirely based on the yōkai myth. Other examples includes the manga series Death Note, Pet Shop of Horrors, Good Luck Girl!, light novel Ghost Hunt, the 2011 animated film A Letter to Momo and RPG videogame franchise Yo-kai Watch.

All content from Kiddle encyclopedia articles (including the article images and facts) can be freely used under Attribution-ShareAlike license, unless stated otherwise. Cite this article:
Yōkai Facts for Kids. Kiddle Encyclopedia.