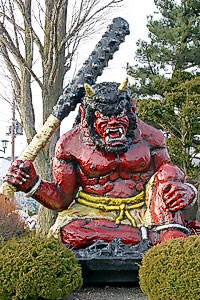 A statue of red oni.

An Oni is a creature from Japanese folklore. They are described as large monsters who resemble ogres, trolls and demons. Sometimes they are described with horns usually wearing a jaguar skin loincloth and are very masculine.

All content from Kiddle encyclopedia articles (including the article images and facts) can be freely used under Attribution-ShareAlike license, unless stated otherwise. Cite this article:
Oni (folklore) Facts for Kids. Kiddle Encyclopedia.