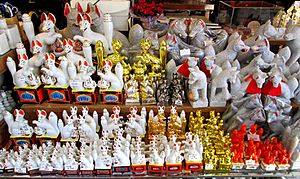 Kitsune is the Japanese word for fox. There are a lot of foxes in Japanese folklore. Stories depict them as intelligent beings and as having magical abilities that increase with their age and wisdom. The most important of their magic tricks is the ability to assume human form. While some folktales speak of kitsune employing this ability to trick others — as foxes in folklore often do — others portray them as faithful guardians, friends, lovers, and wives.

Foxes and human beings lived close together in ancient Japan; this is why there are legends about them. Kitsune have become closely associated with Inari, a Shinto kami or spirit, and serve as his messengers. Kitsune keep their promises and strive to repay any favor.

A kitsune is the messenger of Death. This role has reinforced the fox's supernatural importance. The more tails a kitsune has — they may have as many as nine — the older, wiser, and more powerful it is. Because of their potential power and influence, some people make offerings to them as to a god.

All content from Kiddle encyclopedia articles (including the article images and facts) can be freely used under Attribution-ShareAlike license, unless stated otherwise. Cite this article:
Kitsune Facts for Kids. Kiddle Encyclopedia.