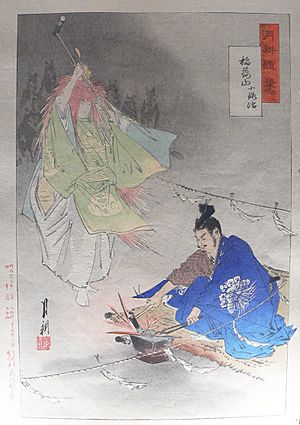 Inari and their fox spirits help the blacksmith Munechika forge the blade kogitsune-maru (Little Fox) in the late 10th century. This legend is the subject of the noh drama Sanjo Kokaji

Inari Ōkami (稲荷大神code: ja is deprecated , also Oinari) is the Japanese kami of foxes, of fertility, rice, tea and sake, of agriculture and industry, of general prosperity and worldly success, and one of the principal kami of Shinto.

In earlier Japan, Inari was also the patron of swordsmiths and merchants. Represented as male, female, Inari is sometimes seen as a collective of three or five individual kami. Inari appears to have been worshipped since the founding of a shrine at Inari Mountain in 711 AD, although some scholars believe that worship started in the late 5th century.

Worship of Inari spread across Japan in the Edo period, and by the 16th century Inari had become the patron of blacksmiths and the protector of warriors. Inari is a popular figure in both Shinto and Buddhist beliefs in Japan. More than one-third (32,000) of the Shinto shrines in Japan are dedicated to Inari. Modern corporations, such as cosmetic company Shiseido, continue to revere Inari as a patron kami, with shrines atop their corporate headquarters.

Inari's foxes, or kitsune, are pure white and act as their messengers.

All content from Kiddle encyclopedia articles (including the article images and facts) can be freely used under Attribution-ShareAlike license, unless stated otherwise. Cite this article:
Inari (mythology) Facts for Kids. Kiddle Encyclopedia.