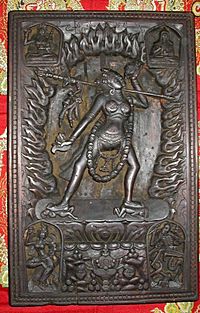 The Chinese and Tibetan terms for dakini literally mean "she who travels in the sky"; this is sometimes written poetically as "sky dancer". Their bodies are depicted curved in sinuous dance poses.

Dakinis are associated with energy. They are linked with the revelation of the path of transformation. They help people to change the energy of negative emotions, called poisons (kleshas), into enlightened awareness.

Tibetan Buddhists believe that a Dakini gave a black hat to the third Karmapa, Rangjung Dorje (1284 - 1339), when he was three years old. The Black Crown became the emblem of this Tibetan lineage known as the Karma Kagyu.

All content from Kiddle encyclopedia articles (including the article images and facts) can be freely used under Attribution-ShareAlike license, unless stated otherwise. Cite this article:
Dakini Facts for Kids. Kiddle Encyclopedia.