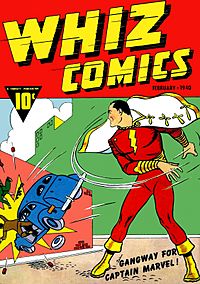 A Captain Marvel comic from the 1940s

Captain Marvel first appeared in Whiz Comics #2 (cover-dated Feb. 1940), published by Fawcett Comics. He is the alter ego of Billy Batson, a boy who, by speaking the magic word "SHAZAM" (acronym of six "immortal elders": Solomon, Hercules, Atlas, Zeus, Achilles, and Mercury), can transform himself into a costumed adult with the powers of superhuman strength, speed, flight, and other abilities.

Based on book sales, the character was the most popular superhero of the 1940s, outselling even Superman.

All content from Kiddle encyclopedia articles (including the article images and facts) can be freely used under Attribution-ShareAlike license, unless stated otherwise. Cite this article:
Captain Marvel (DC Comics) Facts for Kids. Kiddle Encyclopedia.