The Raritan Bayshore region of New Jersey is a subregion of the larger Jersey Shore. It is the area around Raritan Bay from The Amboys to Sandy Hook, in Monmouth and Middlesex counties, including the towns of Perth Amboy, South Amboy, Sayreville, Old Bridge Township, Aberdeen Township, Keyport, Union Beach, Keansburg, Middletown, Atlantic Highlands, and Highlands. It is the northernmost part of the Jersey Shore, located just south of New York City. At Keansburg is a traditional amusement park while at Sandy Hook are found ocean beaches. The Sadowski Parkway beach area in Perth Amboy, which lies at the mouth of the Raritan River, was deemed the "Riviera of New Jersey" by local government. In the last years many of the beaches on the Bayshore area have been rediscovered and upgraded as the quality of the water continues to improve. 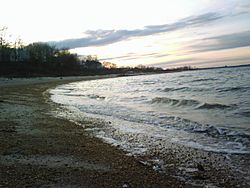 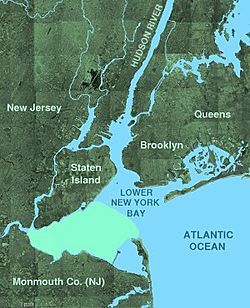 Henry Hudson and the Half Moon

In September 1609, the Halve Maen, anchored along the shores of the Raritan Bay, and remained for five days to explore the estuary and establish contact with local Lenape people (who later become known as the Navesink and Raritan). Four his crew were sent up the Arthur Kill and to Newark Bay. Upon their return they were attacked and one of them, John Colman was fatally shot by arrow. Taken ashore to be buried, the spot was christened Coleman's Point. The location Keansburg still bears the name.

Popular attractions in the Bayshore area include Keansburg Amusement Park and Runaway Rapids Waterpark in Keansburg, Mount Mitchill in Atlantic Highlands, Longstreet Farm in Holmdel, and Rutgers Gardens in North Brunswick. There are also beaches in both of The Amboys, the Laurence Harbor section of Old Bridge, the Cliffwood Beach section of Aberdeen, Keyport, Union Beach, Keansburg, and Middletown. There are also non-commercial boardwalks in Perth Amboy and Keansburg

The Bayshore Regional Strategic Plan is an effort by nine municipalities in northern Monmouth County, New Jersey to reinvigorate the area's economy by emphasizing the traditional downtowns, dense residential neighborhoods, maritime history, and natural environment of the Raritan Bay coastline, especially along the Route 36 corridor along the Sandy Hook Bay.

In August 2006 a report was released, and Monmouth County was asked to vote to have the county planning board approve the plan the Bayshore organization has created. 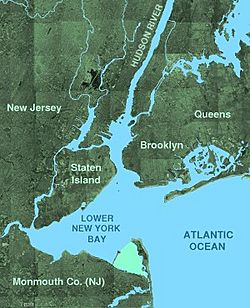 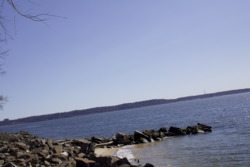 Looking towards the Highlands from Sandy Hook 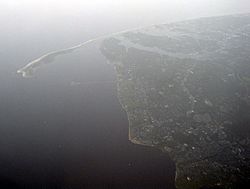 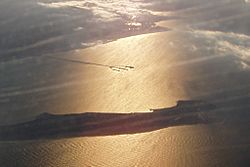 Sandy Hook Bay is a triangular arm of the Raritan Bay, along the coast of northern New Jersey in the United States. It is formed along the south side of the Lower New York Bay by Sandy Hook, a spit of land that protects the bay from the open Atlantic Ocean. The bay provides a sheltered marina for pleasure craft, as well as a harbor for the United States Coast Guard. It is fed by the Shrewsbury River estuary. It is bounded on the west side by the Naval Weapons Station Earle pier.

The Henry Hudson Trail is a bicycling and hiking trail which runs parallel to the southern shore of Raritan Bay and connects the bayshore communities to inland sections of Monmouth County. The trail starts in Freehold Borough and ends at Highlands.

The Bayshore area is mostly flat areas of beach, with the exception of the hills between the Navesink River and the Sandy Hook Bay. Mount Mitchill, a 266-foot (81 m) hill in Atlantic Highlands, is the highest. To the east of Mount Mitchill are the Twin Lights Lighthouse of Highlands, with unobstructed views of Sandy Hook and the New York City skyline. Hartshorne Woods Park is also located in the Monmouth Hills to the south on the banks of the Navesink River.

Ferries to New York City and Exchange Place travel across the Lower New York Bay and enter the harbor at The Narrows, a trip that take approximately 40 minutes.

SeaStreak routes connect the towns of Atlantic Highlands and Highlands to the East River at Pier 11 at Wall Street and East 34th Street Ferry Landing in New York City.

From Memorial Day weekend through Labor Day weekend, service is also provided to the public beaches in Sandy Hook a few times each day by SeaStreak.

All content from Kiddle encyclopedia articles (including the article images and facts) can be freely used under Attribution-ShareAlike license, unless stated otherwise. Cite this article:
Raritan Bayshore Facts for Kids. Kiddle Encyclopedia.