Cliffwood Beach is an unincorporated community and census-designated place (CDP) located within Aberdeen Township, in Monmouth County, New Jersey, United States. As of the 2010 United States Census, the CDP's population was 3,194. 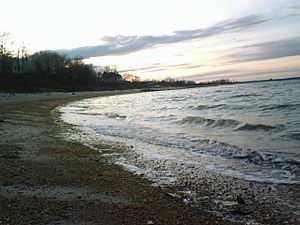 Matawan Township was incorporated on February 23, 1857. This included the village of Middletown Point, Mt. Pleasant, and Matavan including Matavan beach. The beach area of Matavan was later renamed Cliffwood Beach.

A "Cliffwood Beach" directional sign is seen briefly in the 1939 documentary The City (with music by Aaron Copland). An unending traffic jam getting to the beach is used in the film as an endemic problem of unplanned growth.

Cliffwood Beach was a popular resort until the 1960s, with a boardwalk, saltwater swimming pool, dining and dancing at The Cat 'n Fiddle, and other amusements. The beachfront facilities were destroyed by Hurricane Donna in September 1960. All that remains is the swimming pool, though it is currently buried in a sand dune that helps support part of the sea wall.

Cliffwood Beach was an early recipient of aid through the New Jersey Department of Environmental Protection's Green Acres Program [1], which was established in 1961. The township received funds to build a park near the Cliffwood Beach waterfront. The tennis courts have since been converted to an enclosed in-line skating arena, and the original playground equipment and two basketball courts have been upgraded.

It was featured in Weird NJ magazine's Issue #28. The article, "Cliffwood Beach: A Forgotten Resort", recounted the abrupt manner in which the town was forgotten.

Nothing remains for any of the boardwalk amusements, except for the large swimming pool, which lies abandoned and filled with debris.

The beachfront is currently slated for redevelopment, and has been for years. Many of the residents, however, doubt the local government will actually do anything because little has been done over the years to actually help improve the area. 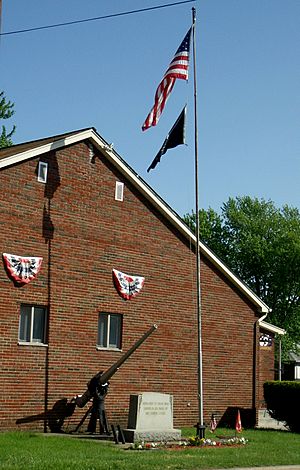 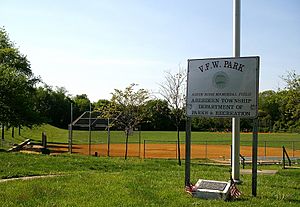 Cliffwood Beach is located north of Route 35 and is bounded by Keyport on the east and Laurence Harbor on the west. The community faces Raritan Bay, including a portion of Keyport Harbor, and Matawan Creek separates Cliffwood Beach from Keyport. To the west, a section of Cliffwood Beach is part of Old Bridge Township in neighboring Middlesex County. The counties are separated by Whale Creek, which is spanned near the bayfront by a concrete bridge. Cliffwood Beach is the home of Guadalcanal Veterans of Foreign Wars (VFW) Post Number 4745, which is used as a community hall, rental facility, and polling place for elections. Adjacent to the VFW Post is Veterans of Foreign Wars Park (VFW Park), which contains Alvin Ross Memorial Field. The field, which has two softball diamonds, backstops, team benches and bleachers, is used for local children's and adults' softball and soccer leagues scheduled by the Aberdeen Township Department of Parks and Recreation. The Aberdeen Township Public Service Facility on Lenox Road is the maintenance and recycling facility for the township.

There were 1,127 households out of which 31.8% had children under the age of 18 living with them, 55.9% were married couples living together, 15.4% had a female householder with no husband present, and 24.2% were non-families. 18.4% of all households were made up of individuals, and 5.1% had someone living alone who was 65 years of age or older. The average household size was 2.82 and the average family size was 3.21.

New Jersey Route 35 runs along the area, being the dividing line between Cliffwood Beach and Cliffwood.

Cliffwood Beach, as a part of Aberdeen, is served by the Matawan-Aberdeen Regional School District.

Cliffwood Beach is also home of the Yeshiva Gedolah of Cliffwood, an institution for advanced Talmudic studies. Headed by Rabbi Shimon Alster, who founded the Yeshiva in September 2004, this institution supplies guidance for young rabbinic scholars, in the areas of Talmudic exegesis, Jewish law and ethics, and intensive Bible study.

All content from Kiddle encyclopedia articles (including the article images and facts) can be freely used under Attribution-ShareAlike license, unless stated otherwise. Cite this article:
Cliffwood Beach, New Jersey Facts for Kids. Kiddle Encyclopedia.