Laurence Harbor is an unincorporated community and census-designated place (CDP) located on the Raritan Bay within Old Bridge Township, in Middlesex County, New Jersey, United States. As of the 2010 United States Census, the CDP's population was 6,536. 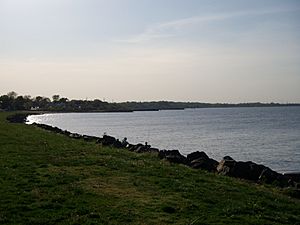 Waterfront at Laurence Harbor, looking westward along the Raritan Bay towards South Amboy

The CDP is located off Exit 120 of the Garden State Parkway. The main routes are Laurence Parkway and Route 35. The railroad, which has no station in Laurence Harbor, divides the community into eastern and western sections, the former being locally referred to as 'The Front'. Cliffwood Beach also borders Laurence Harbor when traveling south.

The shore looks directly upon Staten Island's southern shore; the Verrazano-Narrows Bridge, Lower Manhattan (including the Empire State Building, on a clear night) and Brooklyn can also be seen.

Named after the 1703 family had 645 acres (2.61 km2) here and were the cousins of the infamous pirate captain Henry Morgan .Morgan is located one mile to the northwest, across the Cheesequake Creek and the Morgan Bridge on New Jersey Route 35. The Morgan Draw carries the North Jersey Coast Line, 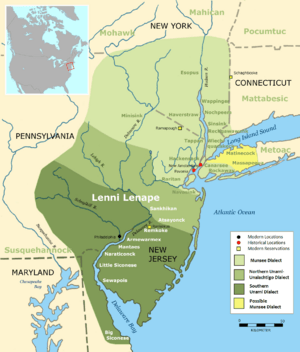 The lands known today as Laurence Harbor were part of the southernmost region inhabited by the Lenni Lenape tribe (also known as the Delaware) in the 17th century. In 1664, they became part of greater East Jersey, and in 1684 became part of a South Amboy that was much larger than it is today. In 1869, Madison Township split off from South Amboy, and was renamed as Old Bridge Township in 1975.

European settlement of the area was linked to commerce passing through the Amboys along the Raritan River. From a military perspective, the area was useful for its high bayside cliffs, which allowed for strategic observation of ships traveling between New York Harbor and the Atlantic Ocean.

Laurence Harbor is named after land developer Laurence Lamb, who bought property in (what was then known as) Madison Township at the turn of the 20th century and subdivided it into bungalow-sized lots. Lamb established a 400-acre (1.6 km2) shorefront golf and country club on the site. Among those who frequented Mr. Lamb's establishment were Clark Gable, Guy Lombardo, the Prince of Wales and the Vanderbilts, who came to party and eat chingarora oysters, for which Raritan Bay was then famous. In 1928, the golf club was sold to developers for the above-mentioned construction of bungalows. A boardwalk, complete with a dance hall, casino, band shell, concession stands and a merry-go-round that played only one song, Let's Remember Pearl Harbor, provided entertainment, hot dogs and ice cream during the 1940s.

For those traveling south from North Jersey or New York, it was the first stretch of Jersey Shore beachfront before reaching Keansburg or Asbury Park.

According to a local historian who grew up in Old Bridge Township, the area was also used during Prohibition by rum runners who would lower their cargo of bootleg liquor overboard into the bay to be hauled ashore by local fishermen.

The Ochwald Brickworks, a brickyard operated in the area where the Bridgepointe townhouses now stand. The brick plant began operation in the early 1900s and continued to the early 1960s. Its 60 workers produced more than 84,000 bricks per day. Nothing remains of the plant as all was demolished for residential dwellings.

There were 2,536 households out of which 28.4% had children under the age of 18 living with them, 51.6% were married couples living together, 11.7% had a female householder with no husband present, and 30.3% were non-families. 24.8% of all households were made up of individuals, and 5.5% had someone living alone who was 65 years of age or older. The average household size was 2.57 and the average family size was 3.09.

Laurence Harbor is home to Laurence Harbor Waterfront Park which consists of a new boardwalk (the old boardwalk was destroyed in the 1940-1950s) which was completed in 2002. The beachfront was redone through a joint venture by Old Bridge Township, New Jersey and Middlesex County Parks Department. It extends approximately one mile from the Old Bridge Police substation south, to the Aberdeen Township neighborhood of Cliffwood Beach, and runs parallel with New Jersey Route 35. This area is very popular for fishing as three jetties extend into the Raritan and are in excellent condition, also recently redone in the past ten years. The park's boardwalk is also popular for jogging and dog walking. At the northern parking lot of the park, there is bay beach swimming access along with a bathroom and showers.

On October 29, 2012, Hurricane Sandy slammed into Southern New Jersey. Its resulting storm surge, estimated to be in excess of 15–20 feet above sea level, destroyed portions of the Old Bridge Waterfront Park. In the Laurence Harbor section, the entire boardwalk was washed out, including one of the new jetties. Two playgrounds and a pavilion were also damaged. In the Cliffwood Beach section of the park, sections of the boardwalk were destroyed. Of the two playgrounds in this section, one was washed out but the equipment was left intact. The other was nearly destroyed, as evident by a large "merry-go-round" that was cemented down, but the force of the water moved it 15 feet from its original position. All houses along the water front boardwalk had no fload damage, but some had minor wind damage like the rest of New Jersey as expected. A small section of the town below the shore ledge did have flood damage.

Following sandy massive improvements to the boardwalk jetty and parks were quickly performed in 2014 when the resources became available. There are now new parks, board walk, jetty railing, and improved erosion protection along the bays edge. It is fully restored beyond its formor glory thanks to the efforts of the town and FEMA. 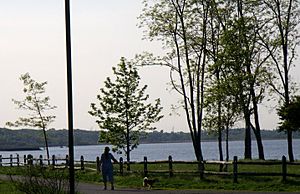 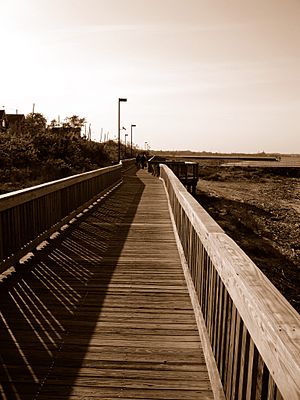 All content from Kiddle encyclopedia articles (including the article images and facts) can be freely used under Attribution-ShareAlike license, unless stated otherwise. Cite this article:
Laurence Harbor, New Jersey Facts for Kids. Kiddle Encyclopedia.