The common box turtle (Terrapene carolina) is a species of box turtle with six existing subspecies. It is found throughout the Eastern United States and Mexico. The box turtle has a distinctive hinged lowered shell (the box) that allows it to completely enclose itself. Its upper jaw is long and curved.

The turtle is primarily terrestrial and eats a wide variety of plants and animals. The females lay their eggs in the summer. Turtles in the northern part of their range hibernate over the winter.

Common box turtle numbers are declining because of habitat loss, roadkill, and capture for the pet trade. The species is classified as vulnerable to threats to its survival by the IUCN Red List. Three U.S. states name subspecies of the common box turtle as their official reptile.

Terrapene carolina was first described by Carl Linnaeus in his landmark 1758 10th edition of Systema Naturae. It is the type species for the genus Terrapene and has more subspecies than the other three species within that genus. The eastern box turtle subspecies was the one recognized by Linnaeus. The other five subspecies were first classified during the 19th century. In addition, one extinct subspecies, T. c. putnami, is distinguished.

Parentheses around the name of an authority indicate that he originally described the subspecies in a genus other than Terrapene. 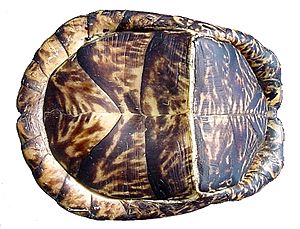 The hinges of the box turtle's lower shell

The common box turtle (Terrapene carolina) gets its common name from the structure of its shell which consists of a high domed carapace (upper shell), and large, hinged plastron (lower shell) which allows the turtle to close the shell, sealing its vulnerable head and limbs safely within an impregnable box. The carapace is brown, often adorned with a variable pattern of orange or yellow lines, spots, bars or blotches. The plastron is dark brown and may be uniformly coloured, or show darker blotches or smudges.

The common box turtle has a small to moderately sized head and a distinctive hooked upper jaw. The majority of adult male common box turtles have red irises, while those of the female are yellowish-brown. Males also differ from females by possessing shorter, stockier and more curved claws on their hind feet, and longer and thicker tails.

There are six living subspecies of the common box turtle, each differing slightly in appearance, namely in the colour and patterning of the carapace, and the possession of either three or four toes on each hind foot. The subspecies Terrapene carolina triunguis is particularly distinctive as most males have a bright red head.

The common box turtle inhabits open woodlands, road sides, road middles, marshy meadows, floodplains, scrub forests and brushy grasslands in much of the eastern United States, from Maine and Michigan to eastern Texas and south Florida. It is found in Canada in southern Ontario and in Mexico along the Gulf Coast and in the Yucatán Peninsula. The species range is not continuous as the two Mexican subspecies, T. c. mexicana (Mexican box turtle) and T. c. yucatana (Yucatán box turtle), are separated from the US subspecies by a gap in western Texas. Three of the US subspecies; T. c. carolina (eastern box turtle), T. c. major (Gulf Coast box turtle) and T. c. bauri (Florida box turtle); occur roughly in the areas indicated by their names. T. c. triunguis (three-toed box turtle) is found in the central United States. 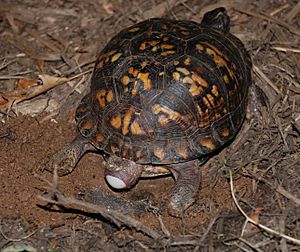 Common box turtles are predominantly terrestrial reptiles that are often seen early in the day, or after rain, when they emerge from the shelter of rotting leaves, logs, or a mammal burrow to forage. These turtles have an incredibly varied diet of animal and plant matter, including earthworms, slugs, insects, wild berries, and sometimes even animal carrion.

In the warmer summer months, common box turtles are more likely to be seen near the edges of swamps or marshlands, possibly in an effort to stay cool. If common box turtles do become too hot, (when their body temperature rises to around 32 °C), they smear saliva over their legs and head; as the saliva evaporates it leaves them comfortably cooler. Similarly, the turtle may urinate on its hind limbs to cool the body parts it is unable to cover with saliva.

Courtship in the common box turtle, which usually takes place in spring, begins with a "circling, biting and shoving" phase. These acts are carried out by the male on the female. Following some pushing and shell-biting, the male grips the back of the female's shell with his hind feet to enable him to lean back, slightly beyond the vertical, and mate with the female. Remarkably, female common box turtles can store sperm for up to four years after mating, and thus do not need to mate each year.

In May, June or July, females normally lay a clutch of 1 to 11 eggs into a flask-shaped nest excavated in a patch of sandy or loamy soil. After 70 to 80 days of incubation, the eggs hatch, and the small hatchlings emerge from the nest in late summer. In the northern parts of its range, the common box turtle may enter hibernation in October or November. They burrow into loose soil, sand, vegetable matter, or mud at the bottom of streams and pools, or they may use a mammal burrow, and will remain in their chosen shelter until the cold winter has passed. The common box turtle has been known to attain the greatest lifespan of any vertebrate outside of the tortoises. One specimen lived to be at least 138 years of age.

Although the common box turtle has a wide range and was once considered common, many populations are in decline as a result of a number of diverse threats. Agricultural and urban development is destroying habitat, while human fire management is degrading it. Development brings with it an additional threat in the form of increased infrastructure, as common box turtles are frequently killed on roads and highways. Collection for the international pet trade may also impact populations in some areas. The life history characteristics of the common box turtle (long lifespan and slow reproductive rate) make it particularly vulnerable to such threats. The common box turtle is therefore classified as a vulnerable species on the IUCN Red List. The common box turtle is also listed on Appendix II of the Convention on International Trade in Endangered Species (CITES), meaning that international trade in this species should be carefully monitored to ensure it is compatible with the species' survival. In addition, many U.S. states now regulate or prohibit the taking of this species.

This species also occurs in a number of protected areas, some of which are large enough to protect populations from the threat of development, while it may also occur in the Sierra del Abra Tanchipa Biosphere Reserve, Mexico. Conservation recommendations for the common box turtle include establishing management practices during urban developments that are sympathic to this species, as well as further research into its life history and the monitoring of populations.

"The turtle watches undisturbed as countless generations of faster 'hares' run by to quick oblivion, and is thus a model of patience for mankind, and a symbol of our State's unrelenting pursuit of great and lofty goals."

In Pennsylvania, the eastern box turtle made it through one house of the legislature, but failed to win final naming in 2009. In Virginia, bills to honor the eastern box turtle failed in 1999 and then in 2009. For the most recent failure, a Republican legislator characterized the creature as being cowardly because of its shell. However, the main problem in Virginia was that the creature was too closely linked to neighbor state North Carolina.

This article incorporates text from the ARKive fact-file "Common box turtle" under the Creative Commons Attribution-ShareAlike 3.0 Unported License and the GFDL.

All content from Kiddle encyclopedia articles (including the article images and facts) can be freely used under Attribution-ShareAlike license, unless stated otherwise. Cite this article:
Common box turtle Facts for Kids. Kiddle Encyclopedia.