Holmdel Township was formed by an act of the New Jersey Legislature on February 23, 1857, from portions of Raritan Township (now Hazlet). The origin of the township's name is unclear, with some sources indicating that it was named for the Holmes family, who were early settlers of the area, while others point to Dutch language words Holm and Del, meaning "pleasant valley".

Holmdel is located 15 miles (24 km) west of the Jersey Shore. The township is notable, among other things, for its historical and present connection to Bell Labs. Important evidence for the Big Bang was discovered at a Bell Labs facility in Holmdel by Arno Penzias and Robert Wilson, both of whom won the Nobel Prize in Physics for their work here. 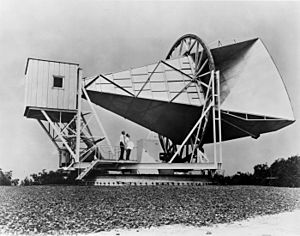 The earliest work on radio astronomy was conducted by Bell Labs engineer Karl Guthe Jansky in 1931 in Holmdel. In 1964, Arno Penzias and Robert Woodrow Wilson of Bell Labs discovered evidence for cosmic microwave background radiation while performing research with the Holmdel Horn Antenna, earning them the Nobel Prize in Physics.

The PNC Bank Arts Center is a 10,800-seat outdoor amphitheatre concert venue located in Holmdel. PNC Financial Services agreed to a deal in 1996 under which it would pay $9.2 million for the naming rights, as part an effort by the Parkway Authority to avoid toll increases, a deal that was extended for another five years in 2006. The facility, which originally opened in 1968, was commissioned by the Garden State Parkway Authority at a cost of $6.75 million and built based on a design by architect Edward Durell Stone. Adjacent to it is the New Jersey Vietnam Veterans Memorial, which opened on May 7, 1995.

In 1977, Bruce Springsteen wrote and recorded many of his songs from his album Darkness on the Edge of Town in an old farmhouse in Holmdel.

Unincorporated communities, localities and place names located partially or completely within the township include: Beers, Centerville,

There were 5,584 households out of which 40.8% had children under the age of 18 living with them, 73.5% were married couples living together, 6.9% had a female householder with no husband present, and 17.4% were non-families. 15.7% of all households were made up of individuals, and 8.9% had someone living alone who was 65 years of age or older. The average household size was 2.92 and the average family size was 3.29.

Holmdel Arboretum, covering 22 acres (8.9 ha) and established in 1963, offers examples of the trees, shrubs and plant life of Monmouth County.

Holmdel Park, initially established in 1962, covers 565 acres (229 ha) and includes the Historic Longstreet Farm (which offers a recreation of farm life in the 1890s) and the David C. Shaw Arboretum, along with athletic facilities and other amenities.

A few major roads pass through the township. Major county routes that cross through include a short stretch of CR 516 in the north and CR 520 in the south. Route 34 passes through the western part while Route 35 goes through in the northern section. The Garden State Parkway passes through near the center with part of Exit 114 (the other half in Middletown Township) and Exit 116 (for the PNC Bank Arts Center) in Holmdel.

NJ Transit and Academy Bus provide service in the area.

All content from Kiddle encyclopedia articles (including the article images and facts) can be freely used under Attribution-ShareAlike license, unless stated otherwise. Cite this article:
Holmdel Township, New Jersey Facts for Kids. Kiddle Encyclopedia.