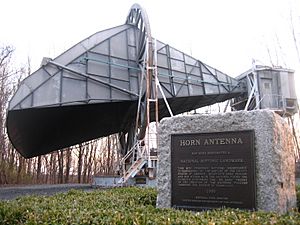 Crawford Hill is located in Holmdel Township, New Jersey, United States. It is Monmouth County's highest point,as well as the highest point in New Jersey's coastal plain, standing at least 380 feet (116 m) above sea level. The hill is best known as the site of an annex to the Bell Labs Holmdel Complex.

More recently the laboratory has undertaken research in the fields of wireless and fiber-optic communication and award-winning Bell Laboratories researchers in these fields, working at Crawford Hill include Herwig Kogelnik and Gerard Foschini.

Herwig Kogelnik won the 2001 Marconi International Fellowship Award and IEEE Medal of Honor for his work in the development of fiber optic technology and the 2006 National Medal of Technology.

Gerard J. Foschini was the 2002 recipient of the Thomas Alva Edison Patent Award for his pioneering inventions having to do with the capacity of communications systems with multiple antennas.

In 2020, Nokia sold the Crawford Hill facility and relocated the remaining Bell Labs research staff to the Murray Hill campus.

All content from Kiddle encyclopedia articles (including the article images and facts) can be freely used under Attribution-ShareAlike license, unless stated otherwise. Cite this article:
Crawford Hill Facts for Kids. Kiddle Encyclopedia.