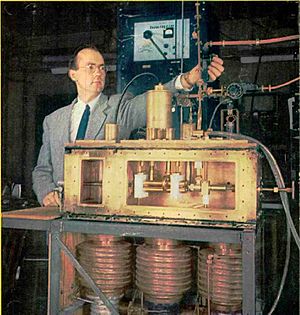 First prototype ammonia maser and inventor Charles H. Townes. The ammonia nozzle is at left in the box, the four brass rods at center is the quadrupole state selector, and the resonant cavity is at right. The 24 GHz microwaves exit through the vertical waveguide Townes is adjusting. At bottom are the vacuum pumps.

A maser is a device that produces light and heat by using atoms to release energy. It was invented by Charles Hard Townes in the 1950s. A maser takes the small vibrations in atoms and amplifies them to release light and heat. Originally, they were referred to by the acronym MASER or 'Microwave Amplification by Stimulated Emission of Radiation. Unlike most radio transmitters, maser waves tend to have very similar wavelengths. Their usage was first predicted by Albert Einstein. In the 1960s masers were made to emit optical wavelengths, and soon were called lasers.

All content from Kiddle encyclopedia articles (including the article images and facts) can be freely used under Attribution-ShareAlike license, unless stated otherwise. Cite this article:
Maser Facts for Kids. Kiddle Encyclopedia.