The municipality of Colts Neck Township was initially established by an act of the New Jersey Legislature as Atlantic Township on February 18, 1847, carved from portions of Freehold Township, Middletown Township, and Shrewsbury Township. The name was changed to "Colts Neck Township" as of November 6, 1962, based on the results of a referendum held that day.

The township has been ranked as one of the state's highest-income communities. Based on data from the American Community Survey for 2013–2017, Colts Neck residents had a median household income of $167,480, ranked fifth in the state among municipalities with more than 10,000 residents, more than double the statewide median of $76,475.

Colts Neck is a community in Central New Jersey, located within the New York metropolitan area. Many people choose to move to Colts Neck due to its open space and proximity to the Jersey Shore, while still being within commuting distance of New York City and, to a lesser extent, Philadelphia. The township's strict zoning ordinances have long kept out urban development and chain stores, allowing for locally owned businesses, while still being close to malls, movie theaters, and other amenities in neighboring communities. A 2007 study of New Jersey's wealthiest communities listed Colts Neck as New Jersey's 16th wealthiest municipality and categorized the township's population as "top rung", meaning:

These communities are the wealthiest consumer market, representing less than 1 percent of all U.S. households. These highly educated residents are in their peak earning years, aged 45 to 64, in married-couple households, with or without children. The median age is 42.3 years. With the purchasing power to indulge any choice, Top Rung residents travel in style, both domestically and overseas. This is the top market for owning or leasing a luxury car; residents favor new imported vehicles, especially convertibles. Exercise and community activities are part of their busy lifestyle. Avid readers, these residents find time to read two or more daily newspapers and countless books.

The township has a Farmland Preservation Committee which to date has preserved nearly 1,000 acres (400 ha) of land, providing one way in which Colts Neck has been able to prevent large-scale development. The township has strict zoning regulations, and because there is no public water or sewage service, most homes must be built on lots covering a minimum of 2, 5 and 10 acres (4.0 ha).

Originally a farming community, Colts Neck has long been known for its large number of equestrian farms. From the 1950s into the 1970s many of Colts Neck's heavily wooded areas were developed with large colonial and ranch-style houses on acre-sized lots. In the 1980s and continuing into the 2000s much of the town's farm land has been replaced with large houses, mansions and sprawling estates, although a large number of equestrian farms remain. During this time period increasing home prices in northern New Jersey and New York City resulted in large numbers of people moving to central New Jersey, causing real estate prices in Colts Neck and surrounding towns to rise considerably over the course of the two decades. Colts Neck real estate prices remain high despite the economic downturn: as of November 2012, the average listing price of a house was $1,433,112 and the number of home sales is down 41.4% from the previous year.

Many of Colts Neck's residents are professional business people who commute into New York City's financial district, as could be seen in the unusual proportion of the small community who were lost in the September 11, 2001 terrorist attacks upon the World Trade Center. A memorial garden dedicated to the five members of the community who were lost was created at the municipal center by sculptor Jim Gary, a member of the community who was raised in Colts Neck. The central feature of the memorial garden is his sculpture of metal and stained glass.

There were 3,277 households out of which 43.1% had children under the age of 18 living with them, 77.4% were married couples living together, 7.0% had a female householder with no husband present, and 13.1% were non-families. 11.0% of all households were made up of individuals, and 6.4% had someone living alone who was 65 years of age or older. The average household size was 3.08 and the average family size was 3.33.

There were 3,513 households, out of which 50.1% had children under the age of 18 living with them, 83.1% were married couples living together, 6.1% had a female householder with no husband present, and 9.1% were non-families. 7.5% of all households were made up of individuals, and 2.9% had someone living alone who was 65 years of age or older. The average household size was 3.17 and the average family size was 3.33. 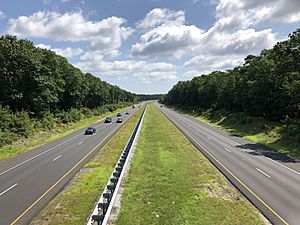 Two major state roads pass through the township: Route 18 (the freeway portion) and Route 34. Major county roads that traverse the township are CR 520 (along the border) and CR 537.

Ferry service is available through the SeaStreak service in Highlands, a trip that involves about a 25-30 minute drive from Colts Neck Township (depending on the section of town) to reach the departing terminal. SeaStreak offers ferry service to New York City with trips to Pier 11 (on the East River at Wall Street) and East 35th Street in Manhattan. The ferry service also offers seasonal travel, such as to the public beaches on Sandy Hook, baseball games at Yankee Stadium and Citi Field, trips to Broadway matinees, Martha's Vineyard in Massachusetts, college football games at West Point, fall foliage in the Hudson Valley, and to the Macy's Thanksgiving Day Parade, among other excursions. 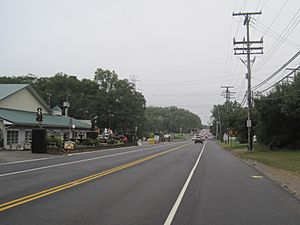 Laird & Company produces Laird's Applejack at its facility in the Scobeyville section of the township. Since the end of distilling in Colts Neck in 1972, the company has had its apples picked and distilled in Virginia, and then brought north to be aged, blended and bottled at its facility in the township. The only remaining producer of Applejack in the United States, the company received the first license granted by the United States Department of the Treasury, which was granted in 1780.

Four JG's Orchards & Vineyards is a winery based in the township, named for the shared initials of the owners and their two children.

Students in public school attend the Colts Neck School District for pre-kindergarten through eighth grade. As of the 2017–18 school year, the district, comprised of three schools, had an enrollment of 966 students and 110.1 classroom teachers (on an FTE basis), for a student–teacher ratio of 8.8:1. Schools in the district (with 2017-18 enrollment data from the National Center for Education Statistics) are Conover Road Primary School with 328 students in grades PreK-2, Conover Road Elementary School with 278 students in grades 3-5 and Cedar Drive Middle School (350; 6–8).

Students in public school for ninth through twelfth grades attend Colts Neck High School, along with students from portions of Howell Township. The Freehold Regional High School District (FRHSD) also serves students from Englishtown, Farmingdale, Freehold Borough, Freehold Township, Howell Township, Manalapan Township and Marlboro Township. As of the 2017–18 school year, the high school had an enrollment of 2,118 students and 139.0 classroom teachers (on an FTE basis), for a student–teacher ratio of 15.2:1. Students may apply to attend one of the district's six specialized learning centers, including the Humanities Learning Center hosted at Howell High School. The FRHSD board of education has nine members, who are elected to three-year terms from each of the constituent districts. Each member is allocated a fraction of a vote that totals to nine points, with Colts Neck Township allocated one member, who has 1.0 votes.

People who were born in, residents of, or otherwise closely associated with Colts Neck Township include:

All content from Kiddle encyclopedia articles (including the article images and facts) can be freely used under Attribution-ShareAlike license, unless stated otherwise. Cite this article:
Colts Neck Township, New Jersey Facts for Kids. Kiddle Encyclopedia.