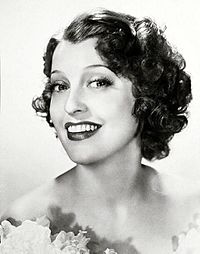 Jeanette Anna MacDonald (June 18, 1903 – January 14, 1965) was an American singer and actress. She was born in Philadelphia, Pennsylvania.

She was known for her roles with Maurice Chevalier in The Love Parade, Love Me Tonight, The Merry Widow and One Hour With You. She also starred with Nelson Eddy in Naughty Marietta, Rose-Marie, and Maytime.

MacDonald was married to actor Gene Raymond from 1937 until her death. However despite being married to Raymond, she was in a domestic partnership with actor Nelson Eddy at the same time.

All content from Kiddle encyclopedia articles (including the article images and facts) can be freely used under Attribution-ShareAlike license, unless stated otherwise. Cite this article:
Jeanette MacDonald Facts for Kids. Kiddle Encyclopedia.