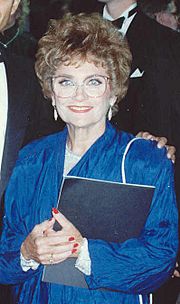 Estelle Getty (July 25, 1923 – July 22, 2008) was an American actress. She was born in New York City to Polish immigrants and was Jewish. She is best known for playing Sophia on The Golden Girls from 1985–1992. She also starred in several motion pictures and other television sitcoms.

Estelle Scher was the daughter of the Polish-Jewisch immigrant Sarah and Charles Scher. Her father opened a glass business. Later, it took Arhur Gettleman.

She did a acting career and attained to a engagement in New York and then, she came to films.

She played also in films like Stuart Little and Stop! Or My Mom Will Shoot with Sylvester Stallone.

In 1947 she married Arthur Gettleman and took the surname of her husband. She changed the surname in Getty. 2000 she got Parkinson's disease and you didn't see in the public. In 2004 her husband died and she moved to Los Angeles. In 2008 she died, just 3 days before her birthday. In her later years, after retiring from acting, she battled Lewy body dementia.

All content from Kiddle encyclopedia articles (including the article images and facts) can be freely used under Attribution-ShareAlike license, unless stated otherwise. Cite this article:
Estelle Getty Facts for Kids. Kiddle Encyclopedia.