Bergen Town Center is a shopping center located in Bergen County, New Jersey, USA. The center consists of both an indoor mall and exterior outlying stores and occupies over 105 acres split between the municipalities of Paramus and Maywood.

The center, which was built as the Bergen Mall, opened in 1957 as one of several regional large-scale outdoor shopping centers rolled out nationwide, and was the largest of its kind at the time of its opening. It is the second-oldest mall in New Jersey. The mall offers a gross leasable area (GLA) of 917,129 sq ft (85,204.1 m2). The mall is located at the junction of Route 4 and Forest Avenue, and includes a separate shopping strip, south of Route 4 connected to the rest of the property via a pedestrian bridge. The mall has over the years included community spaces, including a chapel, theater for live dramas, post office, auditorium, ice rink, bowling alley and a children's amusement ride area, and is the current location of the Bergen County Museum. The Bergen Mall was designed by John Graham of New York City. The mall is subject to Bergen County's blue laws, which requires the mall to be closed on Sundays, except for some restaurants and other non-clothing establishments. 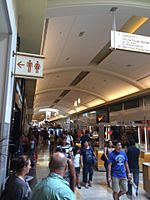 The interior area of the mall

In July 1972, the owners of the Bergen Mall announced that they would begin converting the facility from an outdoor shopping plaza with a vast number of stores to an enclosed structure with all of these stores operating under one roof; the new mall would be anchored by Stern's at one end of the enclosed structure and Ohrbach's at the other. This was part of a general trend underway at the time where large-scale outdoor centers, like the Bergen Mall, had been for its first fifteen years and Garden State Plaza, which had been commissioned by R.H. Macy and Company and opened in 1957, was at the time, were no longer as popular while massive indoor facilities, like the Fashion Center (which opened in 1967) in Paramus and Willowbrook Mall (which opened in 1968) in Wayne, were becoming more and more popular. On September 15, 1973, the renovated mall held its grand reopening. Unlike its other regional counterparts, however, the Bergen Mall did not make attempts to modernize its look as the years wore on and proceeded to look dated.

In 1986, the Bergen Mall lost one of its two anchors when Ohrbach's closed its doors following a takeover by the Amcena retail group. Amcena reconfigured the store, as well as the other Ohrbach's stores it opted to keep, and it reopened in 1987 as part of the company's Steinbach chain. The store was converted to Value City in 1997 and later closed and demolished in the mid-2000s.

In the early 1990s the mall was repositioned as a value-oriented center that included a Marshalls, Gap Outlet, and a Saks 5th Avenue Off 5th outlet. Across the street from the main mall is a little strip mall that was part of the mall property. It is located across from Forest Avenue and was connected with an auto and a pedestrian bridge. Chuck E. Cheese's opened in the mini strip mall across the street in 1993. It closed in November 2010 due to the redevelopment plans of that area including the old former Health Spa 2 The Chuck E. Cheese relocated to the Shoppes at IV in 2011. The site of the former Chuck E. Cheese's is now a Red Robin restaurant. Other tenants in the strip mall were Spa 2 (closed 2004; replaced by REI) and Shop Rite. The Shop Rite store closed in 1998 and was moved to its current location on Route 4 near the mall. Kirkland's Furniture occupied the former Shop Rite space in the strip mall until 2020.

Another major change came to the mall in 2001, and this involved the store it had been built around. In 1992, Stern's owner Allied Stores merged with Federated Department Stores. Two years later, Federated acquired R.H. Macy and Company out of bankruptcy. This gave Federated the position of having three different properties being anchors at the three major Paramus malls. In addition to Stern's and the A&S store co-anchoring Paramus Park, the acquisition gave Federated control of the Macy's store at Westfield Garden State Plaza.

In 1995, the year after acquiring Macy's, Federated decided to discontinue their A&S brand and converted the Paramus Park location to a Macy's to give them a second location in Paramus. Six years later, they made a similar decision to retire the Stern's brand and the Bergen Mall flagship joined most of its other sibling stores and was rebranded as Macy's. Federated did not keep the store open much longer, however, electing to liquidate it in 2005 and focus on their other two Paramus locations. Shortly after, the Macy's was converted into a Century 21 store.

The Bergen Mall was the target of a lawsuit by nuclear-freeze advocates who challenged the mall's restrictions on distribution of literature to shoppers. On October 12, 1984, Bergen County Superior Court judge Paul R. Huot ruled that the organization should be allowed to distribute literature anywhere and anytime in a shopping mall, noting that "the Bergen Mall has assumed the features and characteristics of the traditional town center for the citizens who reside in Paramus and surrounding Bergen County towns."

The Carmelite Chapel of St. Therese was located in the basement section called "The Village" since 1970, modeled after the Carmelite location in the basement of Northshore Mall, which opened in 1960. It moved to the upper level in 2007 when the center was redesigned. The chapel had masses daily from Monday-Saturday. However, since the mall is closed on Sundays, the chapel was closed and did not provide Sunday masses. The chapel also housed a gift shop which was located next to the chapel entrance. The chapel closed its doors on March 1, 2017, which was the final mass held inside the chapel.

The mall's water feature was a dandelion fountain, a replica of the El Alamein Fountain in Sydney and the twin fountains at the entrance of 1345 Avenue of the Americas on Sixth Avenue in Manhattan.

In 2003, the mall was sold by Simon Property Group to Vornado Realty Trust, which began plans to convert the mall's format, with high-profile stores, and changes in the looks of the mall.

In one of the first changes planned for the mall, Century 21 opened on August 10, 2006, taking 67,500 sq ft (6,270 m2) of space in the old Stern's/Macy's building. Century 21 occupies the middle two floors of the four story building (1&2), while Home Goods/Bloomingdale's-The Outlet Store occupy the Lower Level (LL) and Lincoln Tech occupies the 3rd floor (3).

New additions in 2009 include Target (Opened March 7, 2009), a Wetzel's Pretzels, Subway, Baskin-Robbins, Dunkin' Donuts, Verizon Wireless, an AT&T store, and a Whole Foods (which opened on August 19, 2009 and signed a lease for 77,000 sq ft (7,200 m2).), Filene's Basement (opened October 28, 2007, since closed and replaced by Home Goods which opened in October 2013.), Lowe's, Nike Factory Store (opened March 7, 2009), Bobby Flay's Bobby's Burger Palace (opened March 31, 2009), and Nordstrom Rack (Opened March 12, 2009). A Grand Opening Celebration was held on August 25, 2009 to mark the completion of the renovation/expansion. Filene's Basement filed for bankruptcy protection on Monday, May 4, 2009. An affiliate of Men's Wearhouse has won the bidding process, with plans to keep approximately 20 of the chain's stores open. The five-year-old Filene's at Bergen Town Center is one of six stores that closed as part of the transaction. In October 2013, Home Goods opened in the space formerly occupied by Filene's Basement. This is their second location in Paramus, the other being on NJ-17 near Ridgewood Ave. H&M will be opening its third Paramus location at Bergen Town Center Holiday 2013. The 27,000 sq. feet two-level store will be larger than the H&M stores at Westfield Garden State Plaza and Paramus Park and will be located at the center of the mall next to J. Crew Outlet.

In 2015, it has been confirmed that the mall will undergo a $130 million 200,000 square foot expansion, which will include adding another level to the mall and new tenants.

In January 2018, it was announced that the Best Buy location at nearby Westfield Garden State Plaza would close and be relocated to the Outlets at Bergen Town Center property next to the strip mall. It opened on April 14, 2018. In June 2018, it was announced that a Burlington Coat Factory store would go above Marshall's and would occupy space that used to house the Chapel on the mall as well as some mall offices. The mall ceiling between Saks OFF 5th and Marshall's is expected to be raised so that escalators and an elevator are able to reach the store. The Burlington Coat Factory store opened in August 2019. Also, Pei Wei Asian Diner and Potbelly Sandwich closed in the mall to make way for Ruth's Chris Steak House, which opened in November 2018. It was also announced that the current bridge that connects the mall and the other shops on the other side would be replaced. The former Midas Tire shop is also expected with a new restaurant that is yet to be determined. The work on the Parking Deck near Marshalls and Saks OFF 5th and the bridge are all expected to be complete by September 2018.

In the summer of 2020, Kirkland’s Furniture closed. Then, the Subway and AT&T stores both closed in 2021.

On September 10, 2020, it was announced that Century 21 would be closing all stores, including the Bergen Town Center location. The location closed permanently on Saturday, December 5th, 2020 instead of Sunday, December 6th, 2020 because of the Bergen County Blue Laws which prevents all non-essential retailers from operating on Sunday's. In November 2020 Urban Edge Properties dropped The Outlets from the name of Bergen Town Center.

Playhouse on the Mall

From 1960 to 1982, the mall included the Playhouse on the Mall, a 635-seat theater. The developer, Allied Stores, was persuaded to build the theater by producer (and future novelist) Robert Ludlum, who managed the theater from 1960 to 1970. Productions included a mix of Broadway revivals (The Best Man, Two for the Seesaw, A Little Night Music) and pre-Broadway tryouts (The Typists and the Tiger, The Owl and the Pussycat), and attracted a variety of movie, television, and Broadway talent. The theater's most successful production was an annual stop by Ann Corio's This Was Burlesque revue. The theater closed in the face of rising costs and dwindling audiences, and was converted to retail space in 1986.

All content from Kiddle encyclopedia articles (including the article images and facts) can be freely used under Attribution-ShareAlike license, unless stated otherwise. Cite this article:
Bergen Town Center Facts for Kids. Kiddle Encyclopedia.