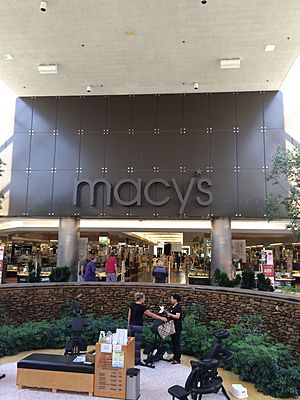 The mall's north wing has been anchored by Macy's since 1995. The location was formerly occupied by A&S from its opening until the store was rebranded 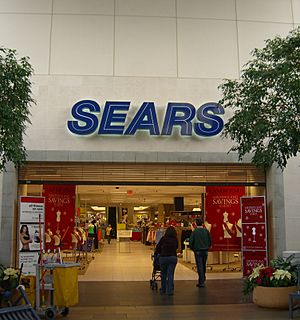 Sears was the anchor of the mall's south wing until it closed in 2018 and replaced by Stew Leonard's.

Paramus Park is located on a plot of land between the northbound lanes of Route 17 and the southbound lanes of the Garden State Parkway, approximately two miles from the interchanges of both highways with Route 4. It is accessible from the northbound Garden State Parkway at exit 163 and at exit 165 in both directions. An entrance to the southbound lanes is located in the mall's rear parking lot. Access off of NJ 17 is available on two access roads named for its two original anchors, Sears and Abraham & Straus (later became Macy's). The Sears Drive entrance is only available from the northbound lanes but southbound drivers are able to access A&S Drive via an exit and an overpass constructed specifically for the mall.

At 767,000 square feet (71,000 square metres) and about 100 stores, Paramus Park, compared to the larger Westfield Garden State Plaza (which is three times its size), is a more regional, destination-oriented mall, with a higher-than-average sales per square foot, estimated by industry experts to be between $400 and $500 a square foot or more. In addition to attracting upscale shoppers and tenants, its smaller stores, lower congestion and location along the Garden State Parkway in an affluent area attracted shoppers responding to the late-2000s recession, according to a 2011 NorthJersey.com report.

Paramus Park, Westfield Garden State Plaza, The Outlets at Bergen Town Center and Fashion Center account for a major portion of the $5 billion in annual retail sales generated in Paramus, more than any other ZIP Code in the United States. Paramus Park gets 6 million visitors annually to its 107 stores. Located in Bergen County, the mall is subject both to the county's Blue laws and the borough's stricter ordinance, which require them to be closed on Sundays, though establishments with their own separate entrances are able to remain open on Sundays, such as Stew Leonard's and Club Pilates.

Paramus Park was initially one of three enclosed malls in Paramus at the time of its construction. The Fashion Center, which is located near Paramus Park along Route 17, was the first built specifically as a strictly-indoor facility and opened in 1967. The Bergen Mall, located on Route 4 and built in 1958, became the second when the former outdoor mall was enclosed in 1973. (At the time Garden State Plaza, built in 1957, was still an outdoor mall; it completed its conversion to an enclosed mall in 1984.) Paramus Park remains one of three indoor malls in Paramus; the Fashion Center and The Shoppes on IV, the latter constructed after Paramus Park was built, were converted into outdoor shopping plazas.

The mall, developed by The Rouse Company, opened on March 14, 1974, with a 300,000 sq ft (28,000 m2). Abraham & Straus (now a Macy's store) and Sears (which did not open until August) as anchors and space for 120 specialty stores. The Paramus High School Marching Band played at the grand opening. The mall's second-floor food court was a new innovation, and is now credited as the first successful shopping mall food court. A Fortunoff opened at the store in 1977.

The mall is shaped as a four-legged zigzag, with an anchor store at each end and the mezzanine-level food court encircling an atrium which featured a 30-foot (9.1 m) terraced waterfall surrounded by vegetation and punctuated by a pair of escalators. A stairway and a glass elevator surrounded by terraced gardens rounded out the access points to the 2nd level food court until 2002 when it was demolished due to long lines, and replaced by two new elevators which were relocated. To this day, the food court is very popular at the lunch hour with the area office workers. The garden-like design was prevalent throughout the rest of the mall. Trees lined the main promenade of the mall, along with park benches; all under large skylights. Two small courtyards were at the other leg intersections; one hosted a carousel and the other a lowered seating area with a bronze statue of a turkey. The last carousel was installed during the 1990s. The carousel was installed by Peter and Tony Bowen of Bowen Accountants in 1976, when at the time the play area was considered dangerous and was the site of a number of child injuries. The carousel was removed in August 2013 so that the mall could use that space for other purposes. The carousel was then moved to At Play indoor amusement park (formerly Fun Zone) in Farmingdale, New York shortly after, where it currently operates. The turkey statue was inspired by the name of the town from which the mall gets its name. Paramus comes from the Lenni Lenape Native American word meaning "land of the wild turkey" or "place of fertile soil".

Paramus Park is mentioned in the lyrics of the 1977 Dean Friedman song "Ariel". The two characters in the song were "standing by the waterfall at Paramus Park". 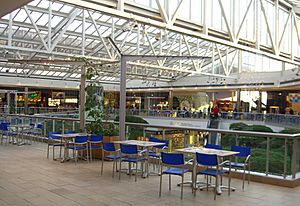 The second floor food court, as seen in 2009

In 1986, Paramus Park was the site of an innovative McDonald's restaurant in its food court, which featured a decor with oak trim, pastel tiles and marble counters, in lieu of the traditional plastic interior in primary colors. The facility cost $650,000 to construct, 40% more than a typical McDonald's, and was designed to create more of the feel of an upscale restaurant. Closed in 2000, it was replaced by a walk-up. The McDonald's location closed in the 2010s and was replaced by a Burger King. Restrooms are now located in its former location. A Claire's store was opened in 1988, and closed in 2006.

Hanson's 1997 video "Tulsa, Tokyo & the Middle of Nowhere", features the band traveling to Paramus Park on May 7, 1997, performing in the food court in front of over 6,000 screaming fans. The performance was their first public appearance after the release of "MMMBop".

In 2001, the mall was renovated and expanded with the addition of an Old Navy store and Foot Locker complex (which included a Lady Foot Locker and Kids Foot Locker store that were connected to the Foot Locker store) along an elongated East Center Court Entrance. Center court was radically changed in that the waterfall, the gardens, escalators, stairway, elevator, and elevated gardens were removed in favor of a more open space. Two elevators were installed between Cinnabon and Auntie Anne's, a new smaller fountain was constructed, new escalators were constructed and vegetation/trees added, as well as the addition of new seating areas. Throughout the rest of the mall, flooring was changed, lighting was improved, seating areas were added and ceilings and walls were repainted. The Turkey statue was moved from the Macy's midcourt to the upper level food court and the seating area was transformed into a children's play area. The crescent waterfall in front of Macy's was kept, but the seating area surrounding it was removed in favor of a massage kiosk. Among the few stores that have remained from when the mall opened are Sears, which closed in 2018, and Chick-Fil-A.

During the late-2000s recession, the mall's smaller stores, historical lower congestion and location along the Garden State Parkway in an affluent area attracted upscale shoppers and tenants that had previously shifted away from smaller malls in lieu of the larger ones in the area, such as Westfield Garden State Plaza, according to a 2011 NorthJersey.com report.

In 2011 the Foot Locker complex store was closed as L.L. Bean decided to begin leasing the space. The store opened in November 2011. Lady Foot Locker moved to a space in the north wing.

In May 2013, following a unanimous vote from the local zoning board, plans began to construct a 13-screen movie theater on 88,000 square feet (8,200 m2) of space to be added the west side of the mall, attached to the food court. This would have been a Regal Cinemas movie theater. The plans were dormant until late 2017 when the proposal started to pick up again.

In October 2017, a 12-screen movie theater was announced as part of renovations that will replace the Sears store with a Stew Leonard's location. The Stew Lenoard's store is on the lower floor and a Regal Cinemas will be on the upper floor. The Stew Leonard's store opened on September 18, 2019.

The Sears Auto Store closed in late December 2017 and is to be converted into a Sears Appliance Store. The Hallmark store in the Sears wing closed in January 2018 to make way for a new entrance to the movie theater on the second floor. Sears closed on February 3, 2018. On December 20 2019, The movie theater proposal was cancelled because Stew Leonard's ending up taking up more space than expected.

In 2018, Uniqlo announced that it will open at the mall after moving from Westfield Garden State Plaza. The Uniqlo store officially opened on March 1, 2019.

All content from Kiddle encyclopedia articles (including the article images and facts) can be freely used under Attribution-ShareAlike license, unless stated otherwise. Cite this article:
Paramus Park Facts for Kids. Kiddle Encyclopedia.