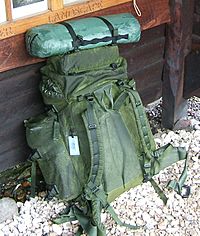 Backpacking is a form of low-cost and basically independent travel. Backpacker is the term for those who travel by carrying a light backpack for a relatively long period of time.

The cost of backpacking depends on the duration of traveling. No matter how long they are planning to travel, backpackers also need to spend money on eating, sleeping and moving. Backpacking travel type minimizes the cost by choosing cheap accommodation, such as youth hostels. One of the popular ones is Youth Hostels Association (YHA). Many hostels are registered with YHA and they have common standards. Depending on room types and season, the cost varies from $10 to $60 per night. Sometimes Backpackers while on a long journey, book accommodations at low rate and stay as a paying guest. Portals like airbnb.com, isearchrentals.com accumulates such kind of paying guest accommodations which helps backpacking travelers choose their stay at low costs.

Backpackers are highly connected to each other. They get information not only from the internet, but also from a bulletin board of their accommodation, Backpackers. They share their information how to get to the destination wisely and about shops or restaurants on the bulletin board. Some backpackers depends on couch surfing, not spending money on accommodation, visiting local people's house. There are Backpackers Group in reach region, who plan their trip on regular intervals year around.

Visa laws in many countries such as Ireland, Australia, Canada, New Zealand and the United Kingdom enable backpackers with restricted visas to work and support themselves while they are in those countries. 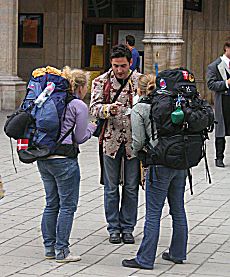 Seventeenth-century Italian adventurer Giovanni Francesco Gemelli Careri has been suggested as one of the world's first backpackers.

While people have traveled for hundreds of years with their possessions on their backs, the modern concept of backpacking can be traced, at least partially, to the Hippie trail of the 1960s and '70s, which in turn followed sections of the old Silk Road. Some backpackers follow the same trail today.

Over the past few decades, backpackers have descended on South East Asia in huge numbers with popular Thai islands and several previously sleepy towns in Thailand, Cambodia and Laos being transformed by the influx of travellers. Backpacking in Europe, South America, Central America, Australia and New Zealand has also become more popular and there are several well-trodden routes around the world that backpackers tend to stick to.

Technological developments and improvements have contributed to changes in backpacking. Traditionally, backpackers did not travel with expensive electronic equipment like laptop computers, digital cameras and PDAs because of concerns about theft, damage and additional luggage weight. However, the desire to stay connected, coupled with breakthroughs in lightweight electronics, has given rise to a trend that has been termed "flashpacking".

Backpackers have traditionally hauled their possessions in 30 litre to 60 litre backpacks, but roller-wheeled suitcases and some less-traditional carrying methods have become more common, and there has been a trend towards keeping pack weights under the 7 kg carry-on limit of most airlines.

All content from Kiddle encyclopedia articles (including the article images and facts) can be freely used under Attribution-ShareAlike license, unless stated otherwise. Cite this article:
Backpacking (travel) Facts for Kids. Kiddle Encyclopedia.