Harvey is a town located in the South West of Western Australia along the South Western Highway, 140 km south of Perth, between Pinjarra and Bunbury. It has a population of 2,606.

Harvey's name is derived from the nearby Harvey River, named by Governor James Stirling in 1829, soon after the river's discovery by explorers Dr Alexander Collie and Lieutenant William Preston RN.

Although not positively known, the river is most likely named after Rear Admiral Sir John Harvey RN. In 1817–18, Harvey was Commander in Chief of the West Indies Station - Stirling served under him while in charge of the HMS Brazen, and Harvey recommended him for promotion. Stirling named a number of Western Australian features after his former navy colleagues.

According to Dr James Battye, Stirling selected 12,800 acres (52 km2) known as Wellington Location 50A and established the Harvey River Settlement. The only improvement he made to the land, as far as is known, was the erection of a hunting lodge near the present town of Harvey, known as "The Hut", featuring a shingled roof, jarrah walls and hexagonal paving blocks. In the 1880s, this hut became the childhood home of children's author May Gibbs MBE. Stirling called the area around the town of Harvey "Korijekup", using the Noongar Aboriginal name meaning "place of the red-tailed black cockatoo". 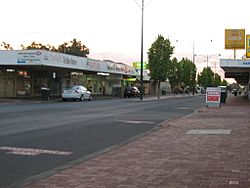 The area was settled slowly over the remainder of the 1800s. During the 1860s, Australind, originally the site of a failed grandiose settlement scheme, was the centre of the Harvey District community. In 1863, a road was gazetted from Pinjarra to Brunswick Junction, which was built by convicts between 1864 and 1876 - it was called the "foothills route" and later became the South Western Highway.

Harvey was developed as a private town in the 1890s by a group of investors following the opening of a railway station there in 1893. However, Cookernup, little more than a railway stop today, had a greater population, and had a telegraph office and school years before Harvey.

In 1926 the Harvey Road Board sought the declaration of a townsite, but this did not occur until 1938.

In February 2006, EG Green & Sons, the owner of the Harvey Beef brand since 1919 and responsible for about 90% of Western Australia's beef exports, went into administration. In April, however, the brand was rescued by a new consortium who acquired EG Green & Sons and recreated it as Harvey Industries.

In 2010, Harvey gained national attention when 19-year-old Jessica Moloney became a finalist in the popular Fox8 show Australia's Next Top Model. She came in fourth place in Cycle 6 of the series. 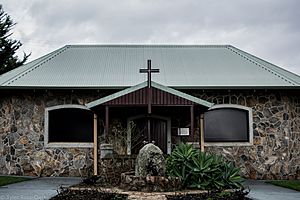 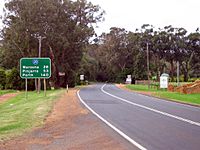 The town is the seat of the Shire of Harvey and is the centre of the Western Australian dairy industry. It contains an agricultural college and the headquarters of both the Harvey Fresh (1986) and Harvey Beef (1919) brand names, and each year in April (previously October) hosts an agricultural show. In addition, a high school, a primary school, dining and shopping facilities, accommodation (hotel, motel, caravan park, farm stay), council offices and the Forest Products Commission's Timber Technology Centre are located within the town.

The railway station contains a museum which documents early life in the town, and the Stirling Cottage (actually a replica of it built 500 m downstream from the original in 1994 after the original cottage succumbed to the elements in the 1960s) has been converted into a tourist information centre and tearooms. An unusual feature is the Italian Internment Shrine, built by Italian internees of Harvey No. 11 Camp during World War II and believed to be one of the only monuments of its kind in existence. 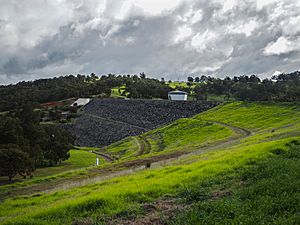 On Harvey Dam Wall. The tower is visible on the middle-right.

Harvey is home to Harvey Dam, which is a popular recreational angling (licensed) and tourist destination, with picnic facilities, walkways and historical information. Harvey Dam's wall can be traversed completely on foot.

On 7 January 2016 the residents of the town were urged to evacuate immediately by Western Australia's Department of Fire and Emergency Services due to an approaching bushfire. Patients at the Harvey District Hospital were evacuated to nearby hospitals along with residents from local nursing homes. On the evening of 8 January, after catastrophic losses in nearby Yarloop, the fire was threatening the town. Harvey was evacuated late on the afternoon of 9 January, but conditions eased the following day and the alert level was downgraded. 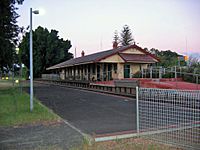 The main road route through the area is South Western Highway (Route 20; Perth to Bunbury via Pinjarra and Waroona). Uduc Road, the town's main street, goes to Old Coast Road near Myalup.

Harvey station is located on the South Western Railway and served by Transwa's twice daily Australind service from Perth to Bunbury.

All content from Kiddle encyclopedia articles (including the article images and facts) can be freely used under Attribution-ShareAlike license, unless stated otherwise. Cite this article:
Harvey, Western Australia Facts for Kids. Kiddle Encyclopedia.