May Gibbs facts for kids

Cecilia May Gibbs MBE (17 January 1877 – 27 November 1969) was an Australian children's author, illustrator, and cartoonist. She is best known for her gumnut babies (also known as "bush babies" or "bush fairies"), and the book Snugglepot and Cuddlepie.

The family planned to move to South Australia to set up a farm in 1879 due to Herbert's failing eyesight, the result of a boyhood injury. However, as Gibbs had caught the measles, her father and uncle George Gordon Gibbs (c. 1860 – 24 August 1921) went to Australia, leaving her mother in England to care for the children.

On 1 June 1881, the Gibbs brothers arrived in South Australia, and began to look for the land arranged for them by a relative of theirs. Over the next few months, the brothers became disillusioned with the land. Cecilia discovered that she was pregnant again, and decided to make the voyage to Australia with her children. Despite her parents' dismay, Cecilia and the children left, and her third child, Ivan, was born at sea.

A drought in the area caused the family to move again, to Norwood. In 1885, the family moved again to a farm property in Harvey, Western Australia. At the age of eight, Gibbs was given a pony named Brownie by her father. May enjoyed exploring the bush riding her pony, and began to paint and write about the bush at this time. This period of her childhood, and her imaginative interpretation of the bush, was formative in the development of the anthropomorphic bush setting found in her work. When Gibbs was 10, the family moved to Perth, where she was educated at Amy Best's girls' school in Perth. 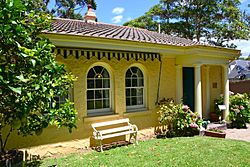 Nutcote, in Kurraba Point (Sydney), where May spent much of her life. 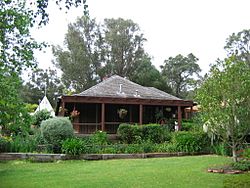 A replica of the Stirling Cottage, Harvey (Western Australia), in which May Gibbs lived.

Derry, Neutral Bay, where May Gibbs lived for a time before she lived at Nutcote.

In 1894, Gibbs attended an artists’ camp set up by HC Prinsep, who along with her father, was one of the founding members of the Wilgie Sketching Club (later the West Australian Society of Artists) at 'Undercliffe' in Greenmount, Western Australia. That year she began painting in oils "anything at all – trying to get beyond the sticky stage… painting plaques to hang on walls and earning enough to keep myself in all but chemist bills", Gibbs stated. She also painted scenery and made set designs for local amateur productions. In the mid-1890s she was attending classes at the Art Gallery of Western Australia. Gibbs was published for the first time in the Christmas edition of the W.A. Bulletin, 1889.

Between 1890 and 1913, Gibbs made several trips to England, primarily to study art. She spent a year at the South Kensington Art School run by Arthur Stockdale Cope and Erskine Nicol, and attended classes at the Chelsea Polytechnic (now Chelsea College of Arts), studying under Augustus John and Ernest Borough Johnson. She graduated in 1905 with first class passes in every category. During her time in England, Gibbs completed assignments as an illustrator for George G. Harrap and Co., published a fantasy about London chimneys, About Us (1912), and drew cartoons for the Common Cause, published by the Suffragettes.

On her return trips home to Australia, Gibbs produced fashion illustrations for The West Australian and cartoons for the Western Australian magazine Social Kodak. She became a regular contributor to Western Mail. Her sketches, illustrations, cartoons and caricatures appeared on the cover and throughout the newspaper between 1904–1908. Notably, Gibbs illustrated an article written by Senator Agnes Robertson on the women's rights movement 'Women's Position in the State’ by 'One of Them’. Gibbs is seen as one of Australia’s first resident professional woman cartoonists and caricaturists and the first Australian woman known to have drawn local political cartoons. "May Gibbs was a pioneer for female cartoonists, especially since she was successful,” noted renowned Australian cartoonist Lindsay Foyle. In 1907 she exhibited five watercolours in the First Australian Exhibition of Women’s Work at Melbourne.

Due to ill health, Gibbs returned to Australia from England in 1913, and settled in Sydney. She took up residence at Derry, a heritage listed semi-detached house in Neutral Bay. 1913 also marked the first public appearance of the gumnut babies, on the front cover of The Missing Button by Ethel Turner, which Gibbs had illustrated. She produced postcards depicting gumnut babies in uniform to support Australia's role in World War One at this time. Gibbs' first book about the gumnut babies, titled Gumnut Babies, was published in 1916. It was soon followed, in 1918, by her most famous work, Snugglepot and Cuddlepie. Gibbs wrote many books on the theme of the gumnut babies.

Gibbs married Bertram James Ossoli Kelly, a mining agent, on 17 April 1919, whom she met during a visit to Perth. In 1925 they moved into their purpose built home Nutcote, then in Neutral Bay (now part of Kurraba Point), in Sydney. He died in 1939.

Gibbs continued to write and illustrate children's books, publishing Little Ragged Blossom in 1920 and Little Obelia the following year. In addition to her work illustrating and writing, Gibbs maintained two comic strips, Bib and Bub 1924–1967 and Tiggy Touchwood 1925–1931, in opposition newspapers. Tiggy Touchwood appeared in the Sunday Sun under the signature "Stan Cottman". The comic strips were published in newspapers in most Australian states and also in New Zealand. In 1923 she published Nuttybub and Nittersing and in 1929 Two Little Gum-Nuts. All her books have been reprinted numerous times and five cartoon books of Bib and Bub have been published.

In addition to her children's books, Gibbs was also an accomplished botanical artist whose work is said to have inspired other artists interested in indigenous flora. Art historian, Anna Jug, has described her work as being both delightfully imaginative and botanically accurate.

May Gibbs died in Sydney on 27 November 1969, and was cremated at Northern Suburbs Crematorium, Sydney. Gibbs bequeathed the copyright from the designs of her bush characters and her stories to Northcott Disability Services (formerly The NSW Society for Crippled Children) and Cerebral Palsy Alliance (formerly The Spastic Centre of NSW). The residue of her estate was left to the United Nations International Children's Emergency Fund.

In 1985 a postage stamp honouring Gibbs, or her best known creations, was issued by Australia Post as part of a set of five commemorating children's books.

In 1988 a street in the Canberra suburb of Richardson was named May Gibbs Close in her honour.

On 3 December 2016, the State Library of New South Wales opened an exhibition of Gibbs’ artwork to mark the 100th anniversary of the publication of Gumnut Babies. In January 2018 a Sydney Ferries' Emerald-class ferry was named in honour of the author. 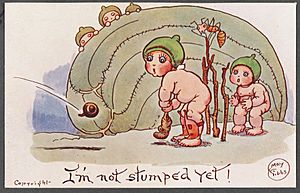 All content from Kiddle encyclopedia articles (including the article images and facts) can be freely used under Attribution-ShareAlike license, unless stated otherwise. Cite this article:
May Gibbs Facts for Kids. Kiddle Encyclopedia.