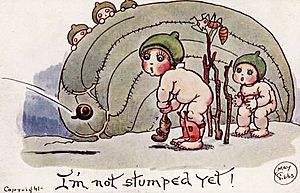 May Gibbs based some of the characters and scenery on the plants found in the bushland of Harvey, Western Australia, where she played as a child.

The "big bad" Banksia Men are the villains of the story and are modelled on the appearance of aged Banksia "cones", with follicles for eyes and other facial features.

In 1985 a postage stamp honouring the protagonists or their creator was issued by Australia Post as part of a set of five commemorating children's books.

On 27 November 1969 May Gibbs died. On passing she bequeathed royalties of her Snugglepot and Cuddlepie creations jointly to the Northcott Society and Cerebral Palsy Alliance (formerly known as The Spastic Centre). Since then both charitable organisations have been able to use these royalties to further their respective programmes helping children and adults with disabilities.

All content from Kiddle encyclopedia articles (including the article images and facts) can be freely used under Attribution-ShareAlike license, unless stated otherwise. Cite this article:
Snugglepot and Cuddlepie Facts for Kids. Kiddle Encyclopedia.