As early as 1898, the land was reserved for conservation and recreation. Two years later, it was named Greenmount National Park. It was still being identified as National Park in the late 1930s, and it was not until 1947 that the name change occurred to commemorate Sir John Forrest, the first Premier of Western Australia.

It was bisected by the Eastern Railway when it was constructed in the 1890s and rail traffic passed through until 1966, when the line was closed due to the opening of the Avon Valley route. 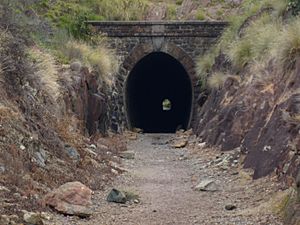 The Swan View Tunnel is located within the park

The alignment through the Swan View Tunnel and through the park was commonly known as the "National Park" railway line.

During the Great Depression of the 1930s many features near the main park buildings were built as part of relief employment. Some have been restored.

After the railway line was closed and removed the formation became part of the Railway Reserves Heritage Trail vested in the Mundaring Shire Council. The section within the park is now known as the John Forrest Heritage Trail. 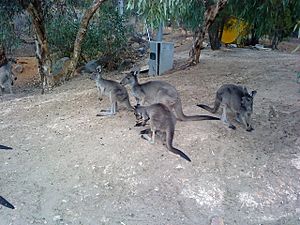 While larger kangaroos remain, significant populations of smaller marsupials have been devastated by foxes, feral cats and dogs in this park.

Drought and dieback have affected the jarrah forest within the park. At the edges of the park, introduced species of weed and problematic vegetation threaten the integrity of the park. In some areas wildflowers remain a feature to the edge of the internal roads despite the changes.

Also with rationalising of staff within the Department of Environment and Conservation management, earlier levels of staffing on parks such as this one have been reduced to minimal levels.

Significant damaging bushfires occurred in the western and northern sections of the park in the 1990s and early 2000s. In November 2010 a bushfire, believed to have been deliberately lit, damaged a significant area of the park including part of the Eagle's View trail.

At various stages parts of the park have been accessed by mountain bike activity.

John Forrest Wildflower Tavern and Restaurant was opened in 1978. It is centrally located within the park just uphill from the ranger's office. It has become a landmark for events such as car club rallies and orienteering clubs. The outside court yard has become a popular tourist attraction as native birds and kangaroos, seeking food, approach close to the building.

All content from Kiddle encyclopedia articles (including the article images and facts) can be freely used under Attribution-ShareAlike license, unless stated otherwise. Cite this article:
John Forrest National Park Facts for Kids. Kiddle Encyclopedia.