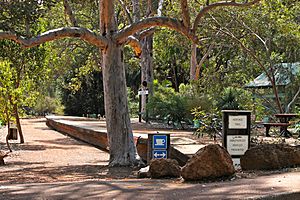 Darlington, Western Australia, is a locality in the Shire of Mundaring on the Darling Scarp, dissected by Nyaania Creek and north of the Helena River.

About one kilometre to the west of Darlington and lower on the Darling Scarp lies the locality of Boya. Between Darlington and Boya there are two abandoned quarries: C. Y. O'Connor's 'Fremantle Harbour Works Quarry’, now known as 'Hudman Road Amphitheatre', and the Mountain Quarry which is also called Boya quarry. They are situated on the southern slope of Greenmount Hill which is defined by the Great Eastern Highway to the North, and the Helena River to the South. The boundary with Glen Forrest to the east has shifted a few times.

Darlington is located upon the escarpment of the Darling Fault which trends North-South across the south-west of Western Australia, defining what is known as the Perth Hills.

Darlington developed as a locality from the establishment of the Darlington Winery in the late nineteenth century. Unlike Glen Forrest and Greenmount Darlington was unplanned. Darlington Hall was originally the winery cellar building.

Darlington was bisected by the Eastern Railway [1890 - 1954 traffic ceased, 1965/1966 the line was closed by act of parliament and removed] which in later years of operation was known as the 'Mundaring Loop'.

Now the Railway Reserve Heritage Trail or 'bridle trail', as it is known by locals, has become a popular walking and bike trail.

Darlington had extensive orchards during the First World War era. It has also, due to its cooler ‘hills climate', had a number of guest houses. D. H. Lawrence stayed in one for a short time during his visit to Australia. Guest houses were also used as convalescent homes during the Second World War period. In the mid twentieth century significant numbers of artists had lived in or been associated with the small community. By the late twentieth century subdivisions of land and the breakup of farms and orchards contributed to an increase in the local population.

Very early on, because of its altitude and separation from the Swan Coastal Plain, Darlington became established as a popular picnic area, country drive destination, and a place for holiday homes.

Writers, artists and others seeking to be separate from Perth's extensive suburban sand plain had sought the location for its natural surroundings. The artists gained the most publicity for their residence, while the writers and others tended to keep their privacy.

A newer arrival, the Darlington Club, is less than two years old and as a social club, is involved in sustaining community involvement and use of the Darlington Hall

It is one of the few hills communities to be served by multiple primary schools—the Darlington Primary School (State school), Tree-Tops Montessori School, and Helena College.

The Darlington Arts Festival, an annual event, has been going for more than 40 years. It includes art exhibitions and other events on the Darlington oval.

The 2006 'Trek the Trail' event was organised on the Railway Reserve Heritage Trail and went from Mundaring to Darlington, and included events on the oval.

The Darlington Review is a monthly publication of some 50 years standing, featuring stories, news, advertisements and other material of local interest. It is one of the few of its kind to serve any hills community for such a long time and is delivered to each address in the locality.

The Mundaring shire council has defined the locality by placing 'Locality of Darlington' signs on its entrance roads at the administrative boundary.

All content from Kiddle encyclopedia articles (including the article images and facts) can be freely used under Attribution-ShareAlike license, unless stated otherwise. Cite this article:
Darlington, Western Australia Facts for Kids. Kiddle Encyclopedia.