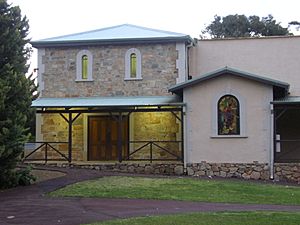 The original structure was a built for the nineteenth century Darlington Winery in 1890 for Alfred Waylen and Josceline Amherst.

It was renovated a number of times over the years

It is now called Darlington Hall, and a part is home to the Darlington Club. The building is registered with the Western Australian Heritage Council.

The original structure is known as the lesser hall, while the more recent larger section on the west side is the main hall.

A large number of local groups and people have used the space for meetings and private events. The Darlington Theatre players (now the Marloo Theatre) had their first plays performed in the hall, and it hosts the art exhibition of the annual Darlington Arts Festival.

It has been the location of the annual Darlington Concerts - also known as the Darlington Chamber Music Series.

Darlington Hall is not related to the fictional place of the same name which appears in the novel The Remains of the Day.

All content from Kiddle encyclopedia articles (including the article images and facts) can be freely used under Attribution-ShareAlike license, unless stated otherwise. Cite this article:
Darlington Hall Facts for Kids. Kiddle Encyclopedia.