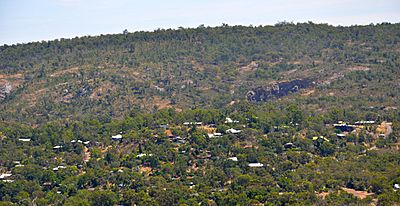 Boya from the south, Mountain Quarry and Greenmount Hill behind

Boya is a locality on the Darling Scarp, in the Shire of Mundaring, Western Australia. On the south side of Greenmount Hill, and just west of Darlington.

The name of Boya was not a local Aboriginal word, but was imposed by government officials in the early twentieth century.

It was crucial as a site of quarries. The Mountain Quarry and the Government Quarry were both important blue stone quarries in their time.

The harbour and moles at Fremantle were built using stone from the Government quarry.

Being at the edge of the Greenmount National Park and the Hudman Road Quarry, Boya has been subject to serious threatening bushfires spreading from these locations in recent years.

In the history of the early Eastern Railway, which passed through Boya, Boya was the location of 'Cape Horn' a notorious curve at the 22 miles mark, where runaway trains derailed a number of times.

The community has a rich architectural variety of houses due to the challenge of steep and rocky blocks.

All content from Kiddle encyclopedia articles (including the article images and facts) can be freely used under Attribution-ShareAlike license, unless stated otherwise. Cite this article:
Boya, Western Australia Facts for Kids. Kiddle Encyclopedia.