Kids Encyclopedia Facts
Nyaania was also a stopping place and locality name (31° 54′ S, 116° 06′ E) associated with the first route of the Eastern Railway between Bellevue and Mundaring in Western Australia 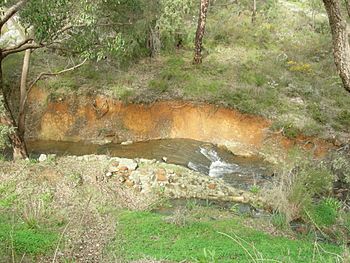 It was originally known as the Smiths Mill Brook on maps between 1902 and 1920. In the 1920s it became known as Nyaania Brook, and in 1945 it officially took the current name.

Its importance stems from the fact that it flows through private land for most of its length, linked to issues that affect watercourses in the Darling Scarp region:

It has significant areas of reserves either adjacent, or within 100 metres (330 ft) either side of its main creek bed. It runs in a number of places along what was rail reserve of the Eastern Railway – which is now the southern part of the Railway Reserve Heritage Trail.

The creek is small in size and width and moves through numerous private properties.

The upper portion of the creek has the Strettle Road Reserve on its north side - which is at the west end of Mahogany Creek which although completely a regenerated plot of land following extensive firing and logging in the last hundred years is a significant reserve.

Near the ex- Statham quarry in Glen Forrest it enters into its first reserve, the Thomas Park reserve.

In Glen Forrest the Glen Forrest Super Block is on its south side just prior to the border with Darlington and near Devil's Terror.

Historically it achieved its significance in the construction of the Eastern Railway where a surveyed route of the railway encountered difficulties with the creek and creek bed. As a cutting was being constructed (near the bottom of Dalry Rd) clay was struck followed by an underground stream which flooded the clay and turned it into a bottomless bog. The locality earned the name in the Perth newspapers of the 1880s as The Devil's Terror and they cite the example of workers sinking in mud.

That section of the railway had to be resurveyed and was shifted 100 meters south along the bed of Nyaania creek. The creek above Glen Forrest was diverted into Chittawarra Brook while a dam was thrown across the creek just to the west of Glen Forrest to hold back the water while a man made channel was built to replace the original creek bed. On completion of the channel the dam wall was breached and Nyaania Creek was allowed to run into the new channel. As a result of this construction the creek bed now runs along the top of the 3 to 5 meter deep cutting. In winter the water can be heard rushing just above ones head as they walk through the cutting.

For the duration of the Eastern Railway route usage (1880s to 1953) the Nyaania Creek/Eastern Railway/Devil's Terror location point of coincidence has had springs under or next to the railway line. The sleepers and rails were removed in the mid 1960s, and ever since they have subsisted even when the Nyaania Creek is dry in the middle of a drought. Many users of the subsequent Railway Reserve Heritage Trail have had a particular attraction to their persistence.

Having passed through the built up area of Darlington it proceeds into a steep valley south of the riding school in Glen Road, and enters Helena River in Helena Valley.

In the 2000s surrounding bushland was focused as rehabilitation areas.

All content from Kiddle encyclopedia articles (including the article images and facts) can be freely used under Attribution-ShareAlike license, unless stated otherwise. Cite this article:
Nyaania Creek Facts for Kids. Kiddle Encyclopedia.