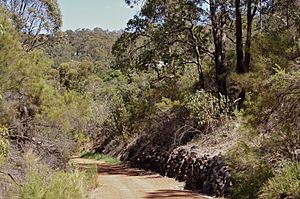 Trail near border between Glen Forrest and Darlington

The trail comprises a loop between Bellevue and Mount Helena, and a line from Mount Helena to Wooroloo.

The loop, called Trail Loop, is 40.8 km (25.4 mi) in length, and follows the two Eastern Railway routes travelling east from Bellevue and meeting up again in Mount Helena, thus forming a loop. The southern route, which traverses Mundaring, is the First Route, opened in 1884. In contrast, the northern route, which passes through John Forrest National Park, follows the Second Route, opened in 1896.

In Mount Helena the Railway Reserves Heritage Trail continues as a line 22.5 km (14.0 mi) in length, called Eastern Extension, onto Wooroloo. The line is coincident with this part of the 75-kilometre-long (47 mi) Kep Track, which continues along the old railway route as far as Northam.

In Kalamunda there is a railway heritage trail that follows the alignment of the old Upper Darling Range Railway. 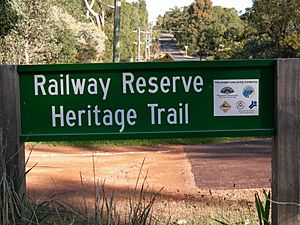 Sign identifying sponsors of upgrades to trail and facilities

It was created following the Western Australian Government Railways (the WAGR, as it was commonly known) ceasing to operate on the Bellevue to Northam railway following the construction of the Standard Gauge Railway in 1966.

The first two attempts at the Eastern Railway from Bellevue to Chidlow, Western Australia both constructed before 1900 failed to have sufficiently low gradients for the increasing tonnages on the railway system. The Avon Valley route taken by the new Standard Gauge line, was the third and final attempt to take the railway system out of the metropolitan area across the Darling Scarp.

The first two Eastern Railway formations were closed by an Act of Parliament in the 1960s, and the lands were vested with the Mundaring Council. As a result, most of the removable property of the WAGR - was removed from the reserve. Notably the Mundaring and Darlington concrete railway platforms remain, and approximately three telegraph poles remain along the original formation. Otherwise all rails, sleepers and buildings no longer remain. The Koongamia platform, although in use for only about five years in the 1960s, was re-built as public sculpture in the 2000s.

Interesting exceptions to the removal of railway operations assets are the stationmaster's houses in Mundaring and Glen Forrest - these have been preserved and maintained. The Mundaring house is currently the location of the office of the Mundaring and Hills Historical Society.

Considerable alterations have been made to the original railway formations by telecommunication, power, road and other authorities. In parts, roads named "Railway Terrace", and other old roads running parallel to the reserve remain unchanged.

In 1988 the Australian Bicentenary saw 17 Heritage Trails funded by the Commonwealth and Western Australian governments under the Commonwealth State Bicentennial Commemorative Program - as the W.A. Heritage Trail Network. The Railway Reserves Heritage Trail was developed by the Mundaring Bicentennial Community Committee, and a pamphlet and signage on the trail was funded by this as well. In the pamphlet and on the signage - the main stopping places as annotated, and the details go as far as Wooroloo.

In some parts the reserve is an important wildlife corridor, while other parts have been degraded by erosion and bushfire damage. It passes through the John Forrest National Park and is one of a number of named trails in the park. Considerable funds have been given to the Mundaring shire to maintain the reserve for use by walkers, cyclists and horse riders (hence the Bridle Trail name recurring). However, despite restraints, motor cyclists and others provide a regular hazard.

The two earlier routes of the Eastern Railway followed closely the line of two creeks – the first route followed Nyaania Creek which is part of the Helena River catchment, while the second followed Jane Brook which joins the Swan River at Middle Swan.

Sections of the reserve have important ecological features that contain examples of a range of conditions found in the region. The whole trail is in effect a vital Wildlife corridor creating connections between adjacent parks and nature reserves:

It also has named parks and reserves either within or linked in the legal bounds of the land designated as the trail:

Trek the Trail is a free walking and cycling event that takes place every September along a section of Railway Reserves Heritage Trail. This annual event, jointly run by the Shire of Mundaring, Mundaring Arts Centre, Mundaring Tourism Association and Mundaring and Hills Historical Society, encourages participants to enjoy art, entertainment, local history, activities and the physical challenge along the Trail. 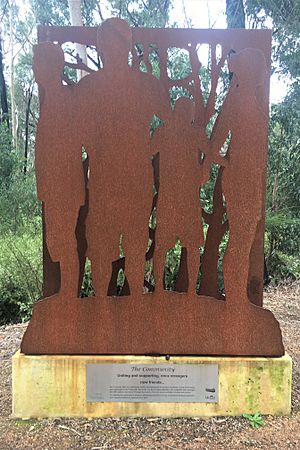 As the trail is a shared trail – cyclists, horse riders and pedestrians share the trail – one route suggested by the Department for Planning and Infrastructure utilises part of the trail.

A newer pamphlet produced by the Mundaring Shire Railway Reserves Heritage Trail is linked with the new website.

All content from Kiddle encyclopedia articles (including the article images and facts) can be freely used under Attribution-ShareAlike license, unless stated otherwise. Cite this article:
Railway Reserves Heritage Trail Facts for Kids. Kiddle Encyclopedia.