Kids Encyclopedia Facts
This page is about the suburb of Perth, Western Australia. For the local government area, see City of Kalamunda.

Kalamunda (Noongar: Karlamarda) is a town and eastern suburb of Perth, Western Australia, located in the Darling Scarp at the eastern limits of the Perth metropolitan area. 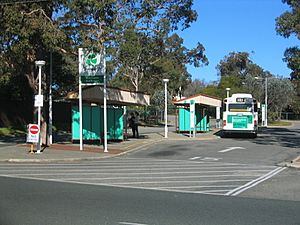 Kalamunda Road serves as a major access road for Perth Airport, and provides the foothills suburbs with access to the Perth central business district.

The suburb is serviced by the Kalamunda bus station, which provides bus services across the Perth metropolitan area.

Kalamunda was once part of a thriving logging region, with Kalamunda railway station the largest station on the Upper Darling Range Railway. The area has a number of features as a result of this railway including a museum at the site of the original station. Typical rail side road structures with a rail reserve between and the Zig Zag road on the old section where the railway climbed the Darling Scarp. It is at Gooseberry Hill that the railway used to descend from the hills to Midland Junction, dropping 300 metres in a series of 5 zig-zag shunts. The railway line has been replaced by a single lane, one-way scenic drive that follows the old track.

Kalamunda has extensive areas with orchards, primarily involved in apple and stone fruit production. The region largely serves as a dormitory suburb for Perth workers. It has a modest retail, government and education sector, and a small industrial base. While the town's retail centre is the largest in the Darling Scarp it primarily services Kalamunda and the contiguous urbanised areas of Lesmurdie and Walliston.

Kalamunda and the surrounding areas have an arts and crafts tradition, and are home to three major Perth residential colleges. Conservation groups are active within the community, and efforts have been made (largely successfully) to maintain native vegetation adjacent to the urban areas, and to some extent with the urban area.

Kalamunda is home to the television towers of all free-to-air Perth Television stations, and the approach control radar for Perth Airport.

The most popular religious affiliations in descending order in the 2016 census were No Religion 33.1%, Catholic 22.4%, Anglican 18.8%, Not Stated 9.0% and Christian, nfd 3.8%. Christianity was the largest religious group reported overall (61.4%) (this figure excludes not stated responses).

The population profile of Kalamunda is slightly in advance of the Perth Metropolitan area with a media age of 47, compared with Perth Metropolitan areas median age of 36, and it is likely that in time it will develop a large retirement population. The population of Kalamunda and the surrounding areas have a diverse ethnicity. Notably however, there are many Italian families who became involved in the orchard industry in the post-Second World War migration period.

Despite the steady encroach of the urban sprawl in recent times which has eroded the sense of a 'regional centre', Kalamunda remains a quiet town amongst the jarrah forests on the Darling Scarp.

Short stay accommodation in a forest setting close to Perth is a growth area, and Kalamunda is increasingly offering eco-tourism experiences for local and overseas visitors.

All content from Kiddle encyclopedia articles (including the article images and facts) can be freely used under Attribution-ShareAlike license, unless stated otherwise. Cite this article:
Kalamunda, Western Australia Facts for Kids. Kiddle Encyclopedia.