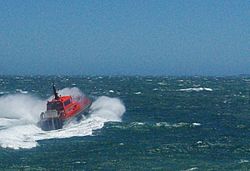 The Fremantle Doctor, the Freo Doctor, or simply The Doctor, is the Western Australian vernacular term for the cooling afternoon sea breeze that occurs during summer months in south west coastal areas of Western Australia. The sea breeze occurs because of the major temperature difference between the land and sea.

The name was in use as early as the 1870s and was similar to equivalent terms for winds that occurred in South Africa and the West Indies.

During summer months, the Fremantle Doctor consistently blows from the southwest along the southern half of the west coast, starting between 10 am and 3 pm. It can penetrate as far inland as 100 kilometres (60 mi), reaching York in the early evening.

In Perth, the capital city of Western Australia, the wind is named the Fremantle Doctor because it appears to come from the nearby coastal city of Fremantle, and it brings welcome relief from the summertime high temperatures.

The Fremantle Doctor often cools the Perth suburbs by several degrees, whilst nearer the coast the wind can be quite strong, often blowing between 15 and 20 knots and making afternoon beach visits unpleasant.

On days when the wind fails, the afternoon temperatures of Perth suburbs are considerably higher, often exceeding 40 °C (104 °F), although this is also attributable to the influence of a strong easterly wind blowing in hot desert air from the arid interior of the state.

All content from Kiddle encyclopedia articles (including the article images and facts) can be freely used under Attribution-ShareAlike license, unless stated otherwise. Cite this article:
Fremantle Doctor Facts for Kids. Kiddle Encyclopedia.