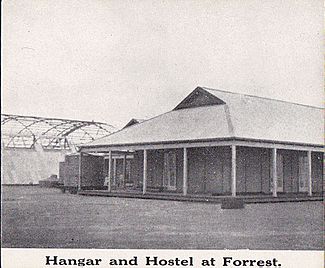 Forrest is a small settlement and railway station on the Trans-Australian Railway in Western Australia. At the 2006 census, Forrest had a population of 18.

Forrest is on the longest stretch of straight railway in the world, at 479 km (298 mi) from Nurina in Western Australia to Ooldea in South Australia.

The airstrip at Forrest was the overnight stop on the first scheduled passenger air service between Perth and Adelaide from 1929 to 1934, operated by West Australian Airways. The 18-room hostel provided a restaurant meal "worthy of any city hotel".

Forrest was named after Sir John Forrest, the explorer who became the first Premier of Western Australia.

Forrest has a typical arid climate; however it is cooler in summer than much of the Australian desert due to its proximity to the ocean. Despite this, Forrest still holds the record for the equal 4th hottest temperature in Australia, 49.8 °C (121.6 °F) recorded on 13 January 1979.

All content from Kiddle encyclopedia articles (including the article images and facts) can be freely used under Attribution-ShareAlike license, unless stated otherwise. Cite this article:
Forrest, Western Australia Facts for Kids. Kiddle Encyclopedia.