Eucla is the easternmost locality in Western Australia, located in the Goldfields-Esperance region of Western Australia along the Eyre Highway, approximately 11 kilometres (7 mi) west of the South Australian border. At the 2016 Australian census, Eucla had a population of 53.

It is the only Western Australian location on the Eyre Highway that has a direct view of the Great Australian Bight due to its elevated position immediately next to the Eucla Pass – where the highway moves out and above the basin known as Roe Plains that occurs between the Madura and Eucla passes.

The name Eucla is believed to originate from an Aboriginal word "Yinculyer" which one (uncited) source gives as referring to the rising of the planet Venus. It was first used by Europeans for the area at some point before 1867.

In 1841, Eyre and Baxter became the first European explorers to visit the area. In 1867, the president of the Marine Board of South Australia declared a port at Eucla, and in 1870, John Forrest camped at the location for nearly two weeks. In 1873, land was taken up at Moopina Station near the present townsite, and work commenced on a telegraph line from Albany to Adelaide. Land was set aside at Eucla for the establishment of a manual repeater station, and when the telegraph line opened in 1877, Eucla was one of the most important telegraph stations on the line. The station was important as a conversion point because South Australia and Victoria used American Morse code (locally known as the Victorian alphabet) while Western Australia used the international Morse code that is familiar today.

A jetty and tram line were constructed for offloading supplies brought in by sea. The town was proclaimed a township and gazetted in 1885, and reached its peak in the 1920s, prior to the construction of a new telegraph line further north alongside the Trans-Australian Railway in 1929.

In the 1890s a rabbit plague passed through the area and ate much of the Delisser Sandhills' dune vegetation, thus destabilising the dune system and causing large sand drifts to encroach on the townsite. The original town was abandoned, and a new townsite established about 4 km to the north and higher up on the escarpment. The ruins of the original telegraph station which still stand amongst the dunes, are a local tourist attraction.

Many of the pioneer farmers and telegraph operators were buried at Eucla, but as the sand dunes encroached onto their graves, some of the headstones and plaques were removed and can now be seen at the museum at Eucla.

Eucla is the largest stopping point between Norseman and Penong for travellers along the Eyre Highway. It has a hotel and restaurant, a golf club (7 km to the north), a museum dedicated to the Old Telegraph Station, and a meteorological station. These together with fishing are the locality's major activities. There is a Travellers Cross that (despite its name) commemorates deceased local people. 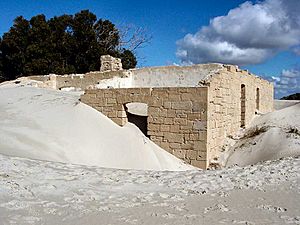 Eucla and the surrounding area, notably Mundrabilla and Madura, use the Central Western Time Zone of UTC+8:45. Although it has no official sanction, it is universally observed in this area, stopping just to the east of Caiguna.

Eucla is a major stop-off point along the Eyre Highway.

In October 2005, Greyhound Australia announced the closure of their Nullarbor service due to rising fuel prices and declining passenger numbers.

Eucla has a mild semi-arid climate with mild winters and warm summers. However, very hot days can occur accompanied by hot northerly winds from the Great Victoria Desert. For a semi-desert climate the humidity is rather high all-year round, due to the moisture from the nearby ocean. Despite its close proximity to the desert, the locality only gets 94.4 clear days annually, which is lower than the humid subtropical cities like Sydney and Wollongong on the east coast.

All content from Kiddle encyclopedia articles (including the article images and facts) can be freely used under Attribution-ShareAlike license, unless stated otherwise. Cite this article:
Eucla, Western Australia Facts for Kids. Kiddle Encyclopedia.