West Toodyay (previously known as Toodyay, Old Toodyay) was the original location of the town of Toodyay, Western Australia. The site was first identified in 1831 by Robert Dale, and the area was surveyed in 1833 with a town established in 1836. In the 1850s it had been affected by flooding, causing the residents to move; in 1860 the new town of Newcastle was established 3 miles (4.8 km) to the east. Newcastle was renamed in 1910 to Toodyay, and the original site became known as West Toodyay.

The town of Toodyay was established on the bank of the Avon River where the valley gave way to gentle slopes of fertile soils with hills on all sides. The main street was South Terrace, which was aligned to the river's course and was crossed by six streets. A second road paralleled South Terrace rising on to the ridge behind the town. The town had a number of home, stores, a school, a hall and two churches. The town also had three inns: The Queen's Head, The Royal Oak and The Highland Laddie. Flooding in 1862 washed away all trace of The Highland Laddie. 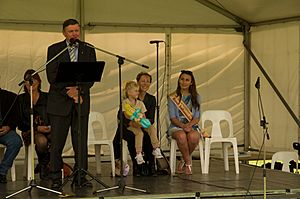 Governor Malcolm McCusker continuing the tradition of attendance, and opening the 160th Toodyay Show in 2013

In 1851 a convict establishment was set up to the east of the town. Following severe flooding in 1857 and 1859, a new town was established in 1860 near the convict settlement; it was named Newcastle, after the Duke of Newcastle.

All content from Kiddle encyclopedia articles (including the article images and facts) can be freely used under Attribution-ShareAlike license, unless stated otherwise. Cite this article:
West Toodyay Facts for Kids. Kiddle Encyclopedia.