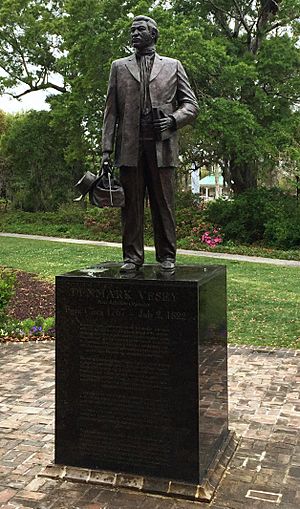 Denmark Vesey (also Telemaque) (c.1767 - July 2, 1822) was a literate, skilled carpenter and leader of African Americans in Charleston, South Carolina. In June 1822 he was accused and convicted of being the leader of "the rising," a potentially major slave revolt which was scheduled to take place in the city on July 14. He was executed on July 2.

Likely born into slavery in St. Thomas, Vesey was enslaved to a man in Bermuda for some time before being brought to Charleston, where he gained his freedom. Vesey won a lottery and purchased his freedom around the age of 32. He had a good business and a family, but was unable to buy his first wife Beck and their children out of slavery. Vesey became active in the Second Presbyterian Church.

In 1818 he was one of the founders of an independent African Methodist Episcopal (AME) Church in the city, which became known as the Emanuel African Methodist Episcopal Church after the Civil War. This first independent black denomination in the US was founded in Philadelphia, Pennsylvania in 1816. His church in Charleston had the support of white clergy in the city. It rapidly attracted 1,848 members, making it the second-largest AME congregation in the nation after Mother Bethel in Philadelphia, Pennsylvania.

In 1822, Vesey was alleged to be the leader of a planned slave revolt. Vesey and his followers were said to be planning to kill slaveholders in Charleston, liberate the slaves, and sail to the black republic of Haiti for refuge. By some accounts, the revolt would have involved thousands of slaves in the city as well as others who lived on plantations which were located miles away. City officials sent a militia to arrest the plot's leaders and many suspected followers on June 22 before the rising could begin, which was believed to be planned for July 14. No white people were killed or injured.

Vesey and five slaves were among the first group of men to be rapidly judged guilty by the secret proceedings of a city-appointed Court and condemned to death. They were executed on July 2, 1822. Vesey was about 55 years old. In later proceedings, some 30 additional followers were executed. His son Sandy was also judged guilty of conspiracy and deported from the United States, along with many others. City authorities ordered the church razed and its minister was expelled from the city.

All content from Kiddle encyclopedia articles (including the article images and facts) can be freely used under Attribution-ShareAlike license, unless stated otherwise. Cite this article:
Denmark Vesey Facts for Kids. Kiddle Encyclopedia.