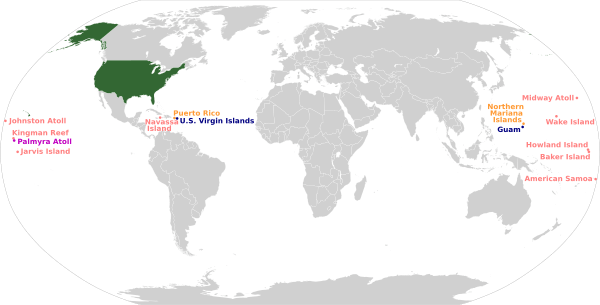 Locations of the insular areas (blue) of the United States (pink).

Insular area is the name for one of the territories of the United States which are not a state of the union. People that live in these areas usually have no right to vote in US elections. Sometimes, they take part in preliminary elections.

There are three areas in the Pacific Ocean:

The following areas are in the Carribean:

The term is also used for many uninhabited islands, which the US claims as its territory. Most of these are in the Pacific:

Only a few are in the Carribean:

All content from Kiddle encyclopedia articles (including the article images and facts) can be freely used under Attribution-ShareAlike license, unless stated otherwise. Cite this article:
Insular area Facts for Kids. Kiddle Encyclopedia.