The Swan Islands, or Islas Santanilla, are a chain of three islands. They are in the northwestern Caribbean Sea. They are about ninety miles off the coastline of Honduras. They have a land area of 8 km2 (3.1 sq mi).

They are within the EEZ of Honduras and belong to the Islas de la Bahía department of Honduras. They consist of three islands:

Rosario Bank and Misteriosa Bank are 130 to 150 km north of the Swan Islands. The >5000 metres deep Cayman Trench separates them.

The islands have no people in them, except for a small Honduran navy garrison. Great Swan has a 3800′ (1158 m) grass airstrip (ICAO code MHIC, IATA code SWA). 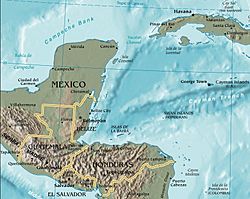 Nautical map of the Swan Islands

Both the United States and Honduras claimed the Swan Islands until the United States dropped its claim. This was under the Guano Islands Act in 1972. The islands gained attention in the early 1960s. This was because of Radio Swan, which began broadcasting in May 1960 during preparation for, and during, the Bay of Pigs Invasion of Cuba. The station was removed from the islands in the late 1960s. Its main transmitter was transferred for use in the Vietnam War.

In October 1998, Hurricane Mitch moved over Swan Island with winds of 180 mph.

All content from Kiddle encyclopedia articles (including the article images and facts) can be freely used under Attribution-ShareAlike license, unless stated otherwise. Cite this article:
Swan Islands, Honduras Facts for Kids. Kiddle Encyclopedia.